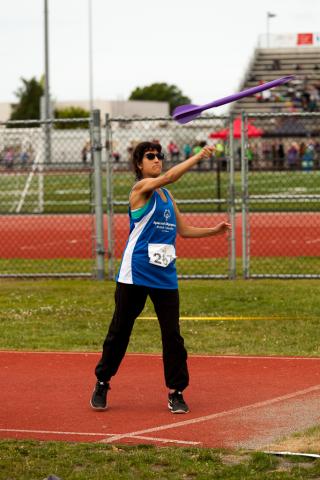 Owens, the Head Coach of SOBC – Kelowna’s rhythmic gymnastics team, said athletes from her Local did an amazing job at the qualifier on May 14, and exceeded all of her expectations. She said the athletes were so proud of themselves each time they finished a routine that it brought her, along with some fellow coaches and parents, to tears.

The 2016 season of summer-sport Regional Qualifiers are seeing many SOBC athletes impress with their skills, determination, and camaraderie, as they compete to qualify for the 2017 Special Olympics BC Summer Games. During these exciting competitions, SOBC athletes have achieved personal bests, made new friends, and celebrated many meaningful milestones.

Owens said SOBC – Kelowna hosting the Rhythmic Gymnastics Regional Qualifier for Regions 1 and 2 was a great opportunity for the Kelowna team. Usually, the team participates in out-of-town competitions, and not every athlete is able to attend. All eight of the Local’s rhythmic gymnastics athletes participated in the qualifier in Kelowna, including some who had never competed in a rhythmic gymnastics competition before.

“It meant that more parents, siblings, friends, and other family members were able to make it out to support the athletes, which was wonderful,” Owens said.

For Owens, the most memorable moments from the competition came when the athletes received their ribbons. Owens said she will never forget seeing the athletes pump their fists in celebration and exchange hugs and high fives with each other and their coaches.

Owens will be stepping down from her coaching role with the rhythmic gymnastics team, as she is moving out of Kelowna. She said watching the Kelowna athletes take part in a competition for the last time as their coach was emotional.

“I was so proud of them all, and seeing how proud they were of themselves was so heartwarming. They came so far this season, and during the four years that I have been coaching them,” Owens said.

When Owens steps down, the team’s assistant coaches will take over as head coaches.

“I know the new coaches are going to do a great job and I am really excited to see how next year goes!” Owens said.

The other excellent Rhythmic Gymnastics Regional Qualifiers were hosted by SOBC – Abbotsford for Region 3, SOBC – Burnaby for Regions 4 and 5, SOBC – Victoria for Region 6, and SOBC – Prince George for Regions 7 and 8.

A lot of effort went into planning the Rhythmic Gymnastics Regional Qualifier for Regions 7 and 8 in Fort St. John. Unfortunately, the event had to be cancelled due to wildfire threats. Strong credit goes out to the organizers for all the effort they put in and to the teams that were travelling for the event.

Read more about the return of SOBC – Williams Lake

Craig Hilker and Kelvin Parent coached the SOBC – Williams Lake team at the Soccer Regional Qualifier. Hilker said the event had a great atmosphere, and it gave Williams Lake players a lot of opportunities to socialize with athletes from different communities.

Despite not having had many chances to practice prior to the qualifier, Hilker said the team got better with every game.

“I was proud of their efforts, they improved each day and each half. By the second game we were seeing passes out to the wingers and we were able to create some offence,” Hilker said.

What Hilker remembers most about the qualifier is how much fun it was for the team, and seeing the athletes’ smiling faces.

“It makes me somewhat emotional thinking about how much fun they all had. We are all looking forward to next year,” Hilker said.

SOBC – Terrace athlete Clinton Ho told CKPG News that the Regional Qualifier was an awesome experience. He said all the teams they played were strong and there was mutual respect among players at the event.

“They treat us nice, we treat them with the same respect they give us, so we are kind of equal,” Ho said.

In an interview with Shaw TV Northern BC, SOBC – Prince George athlete Clayton Juillette said playing at the qualifier might make an athlete nervous at first, but after a while you forget about the crowds and the games become fun.

“It’s actually good because we all get along and we make plays. If we don’t do it right we lose the game, but we also have fun when we are out there,” Juillette said.

Watch this Shaw TV Northern BC piece on the Basketball Regional Qualifier and SOBC’s Healthy Athletes Screening Day in Prince George, an event many athletes who competed in the qualifier attended.

SOBC athletes celebrated more milestones at the Athletics Regional Qualifier for Regions 2, 3, 4, 5, 7, and 8 on June 11 and 12 hosted by SOBC – Langley. The event was the biggest athletics qualifier in SOBC history, with nearly 300 athletes competing. The track meet also saw the introduction of the javelin event and the return of the hurdles, high jump, and pentathlon events to SOBC Regional Qualifiers.

In addition to the event in Langley, SOBC athletes competed in the Athletics Regional Qualifier for Region 6 hosted by SOBC – Nanaimo. One of the meet starters took the time to comment afterward on the athletes’ abilities and energy.

“Like last year, I was so impressed with watching the determination, energy, and enthusiasm of all athletes, and after doing some starting at the Victoria International Track Classic the next day, there was no difference in the commitment of the athletes from Saturday to Sunday,” the starter said.

In addition to the competitions listed above, Locals around the province have hosted thrilling Regional Qualifiers in 5- and 10-pin bowling, bocce, golf, powerlifting, softball, and swimming. Congratulations to all the amazing athletes who competed in these events!

Our heartfelt thanks to all the dedicated volunteers and supporters who make these important opportunities possible, and whose hard work has made this season of Regional Qualifiers a big success.

We are looking forward to more exciting competitions to come in golf, bocce, and soccer!