Everyone has their own reasons for giving, and we wanted to share ours... 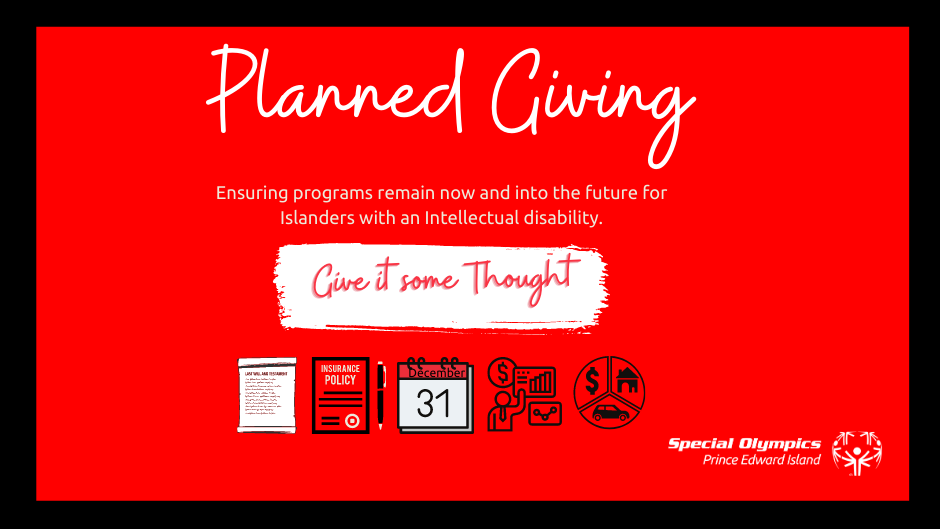 Deborah MacMurdo and Matt Smith have personally seen the impact that Special Olympics PEI has in the lives of Island athletes. Their nephew, Eric Smith has been involved in Special Olympics for 20 years.

"We have seen how the programs offered to Islanders with an intellectual disability have such a positive impact on the lives of these athletes, not only through sport but with the free health screenings offered. Like the 'Opening Eyes" that Eric attended in March of 2019," said Smith "this was where he was connected with a surgical consult to check his cataracts. He was also given a new prescription for his glasses, which he was fitted for that day and received later, free of charge (thanks to the Opening Eyes partners)."

The couple had already decided that they wanted to leave a gift in their will for Special Olympics PEI. When they heard of the cancellation of the annual major fundraiser for the organization, the Enriching Lives Gala, due to COVID they decided now was the time to reevaluate and give a donation to ensure that programs can still exist and that administration would be covered.

"With my sports background, I have had a lot of exposure to the Special Olympics movement across the country and know the value of what is offered." said MacMurdo, after discussing with their financial advisor, the decision was made to transfer shares as a method of donating $10,000 to the organization.

"A lot of people think when making a contribution to an organization, it has to be either cash or in-kind. We want people to start thinking beyond that, at other ways to transfer their assets and investments to maximize the donation the charity receives and the benefits to them personally.This way you get a charitable receipt and it also reduces the amount of capital gains one would otherwise have to pay out. So really a win, win for all involved."

The couple wants to share their story in the hopes of inspiring others to consider new ways to give. "We are just regular people who want to make a difference." MacMurdo said, "Talk to your financial advisor about options such as the gift of insurance, transfer of shares, endowment opportunities, long term monthly giving, or a bequest in your will, just to name a few. You don't have to be somebody wealthy to contribute with so many options available." 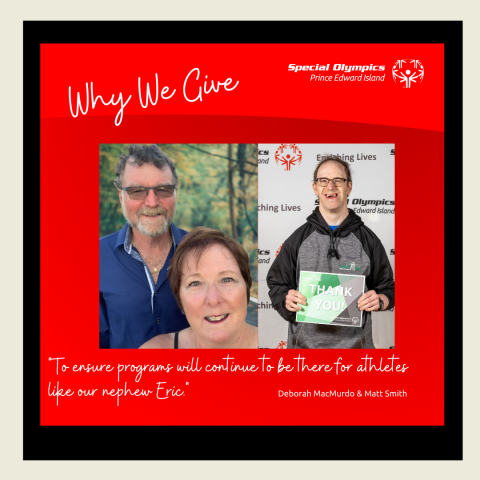 "We also want people to realize the scope of programs that Special Olympics PEI offers across the Island, beyond just the teams that have gone to Provincial, National or World Games over the years." states MacMurdo "These are amazing opportunities, however there are just as many athletes that love to go to their local community sport program. SOPEI is such an inclusive organization, that no matter what the financial situation of the Islander with an intellectual disability, they are able to participate in the programs and services offered and will be treated with dignity and respect."

"When COVID hit, we saw how quickly the organization pivoted to an online platform to ensure that athletes were able to maintain a social connection, stay physically active, safe, and supported while at home. We know that they are working with long-term care homes and ways to continually reach out to athletes unable to participate virtually or to physically return to the field of play, due to the continued restrictions in place."

Charity Sheehan, Executive director for Special Olympics PEI, said "We had always hoped to get to a place of legacy giving, but with so many buckets to fill in the organization, we didn't expect it would happen in the middle of a pandemic. We are grateful for the MacMurdo-Smith donation and inaugural legacy gift with the transfer of shares."

Special Olympics PEI enriches the lives of Islanders with an intellectual disabiltiy through the transformative power of sport. Programs are offered across the province for athletes from ages 2 to over 70, at both the community and competitive levels.

For more information on making a legacy gift to Special Olympics PEI, please contact Charity Sheehan, Executive Director, either by calling 902-368-8919 or via email at csheehan@sopei.com.