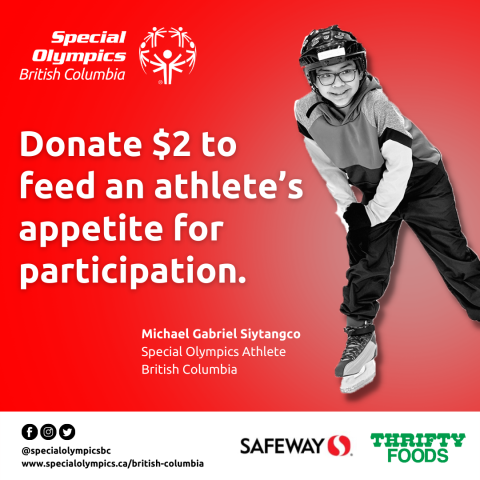 From June 2 to 16, 2022, shoppers nationwide chose to include Canadians with intellectual disabilities on their grocery list, as Sobeys banner stores in nine provinces held their in-store fundraising campaign to support Special Olympics athletes across Canada.

We are so grateful to all Sobeys banner stores, staff, and customers making a difference through the power and joy of sport!

Michael is a Special Olympics athlete who has participated in FUNdamentals and now does skating, swimming, and golf. The Siytangco family knows the transformative power of sport firsthand.

When Michael joined the Special Olympics FUNdamentals program, he was excited to learn new skills like kicking, catching, and throwing. These skills build confidence and make him feel he belongs.

“Michael joined Special Olympics in 2015 and developed his competitive nature early,” Cora says. “FUNdamentals provided him the foundational skills for sports that led him to the Special Olympics swimming and skating programs. In a short period of time, in swimming, he moved from the developmental group to the competitive group. His coaches saw his drive and potential, and provided him opportunity to participate in the 2020 regional swim meets where he got 1st place and 2nd place in his division in the two events where he competed. Likewise, in skating, after only two years, he is now ready to move from skate skills to speed skating.”

“As a family we are so grateful for Special Olympics. We were trying to find programs for the boys, but finding Special Olympics really turned things around for us. Now, I tell everyone to get involved, it makes such a difference,” Cora says. “Special Olympics has been a blessing to our family. … It’s a place where they feel most accepted and included.”

Sobeys banner stores from coast to coast are diverse and inclusive workplaces. Many Special Olympics BC athletes are proud employees of Safeway and Thrifty Foods!

Athlete Arianna Phillips says her favourite healthy recipe is making butter chicken with bell peppers for added nutrition. One of the tips she has implemented from the Sobeys Nutrition Corner is using peppers as a flavour builder, as mentioned in the handout about fruits and vegetables.

Since 2016, Sobeys stores across Canada have donated more $5.4 million in food and funds to Special Olympics. They continue to provide run their significant annual fundraising campaign while also providing year-round support through nutrition education, event sponsorships, and employment opportunities for athletes nationwide.

As part of their commitment to Special Olympics, Sobeys believes in the abilities of people with intellectual disabilities to achieve their dreams and to make a meaningful impact where they work, live, and play. Sobeys’ partnership with Special Olympics includes support through fundraising initiatives, sponsoring National and Provincial Games, and donating gift cards and food to support various activities across the country.

Sobeys is dedicated to helping Special Olympics athletes improve their health by providing healthy food and nutrition education, leading to both better performance and healthier lives.

In addition, many Sobeys employees volunteer at Games and other Special Olympics events.

In B.C., funding from Sobeys goes directly to grassroots Special Olympics BC programs around the province, and also supports Provincial Games and a wide range of provincial programs, events, and development opportunities that benefit athletes and volunteers throughout the Special Olympics BC community.

Be part of Special Olympics BC’s empowering and eye-opening year-round sport programs and change lives, including your own!