Look at a green apple. Look at a red apple. Different on the outside – but inside, they’re the same.

That was one of the inclusive metaphors explored by students at Jaffray Elementary / Jr. Secondary School students on March 6, the 11th annual international awareness day for the Spread the Word: Inclusion campaign. These inspiring young people joined champions around the province and the globe in speaking out to show respect and inclusion for individuals with intellectual disabilities.

The Spread the Word to End the Word campaign has been working to spread respect and inclusion for the past 10 years by addressing the excluding and demeaning impact of the words “retard(ed).”  Since 2009, more than 1 million people have pledged to end their use of the R-word, and the pledges and awareness have made a difference – in 2017, 70 per cent of teens said they spoke out against the wrong and demeaning use of the R-word when it used in conversation, up nearly 50 per cent since 2009.

The campaign’s new form – Spread the Word: Inclusion – builds on the success of the past 10 years by challenging everyone to commit to respect and include. The campaign engages schools, organizations, communities, and champions to pledge their support of inclusion at www.spreadtheword.global and to promote inclusion, acceptance, and respect of individuals with intellectual disabilities through a variety of events and actions every day, everywhere. Read more from campaign co-founders Soeren Palumbo and Tim Shriver Jr.

As Special Olympics BC – Langley athlete Christian Burton says, “The words we use can be very powerful and hurtful and cause a person to feel very badly about themselves. The R-word is one of the words that is very hurtful toward others. Even if it is not intended to hurt and is only used as slang or to make fun of a friend, it still hurts anyone who has an intellectual difference who may be listening. Using the word is never acceptable and we need to educate people to stop. Just Stop! We always want to be kind with our words as well as our actions.”

In B.C., champions of inclusion shared messages of respect and understanding through social media on and around the Spread the Word awareness day, reaching thousands of followers. Check out some of the impactful messages: 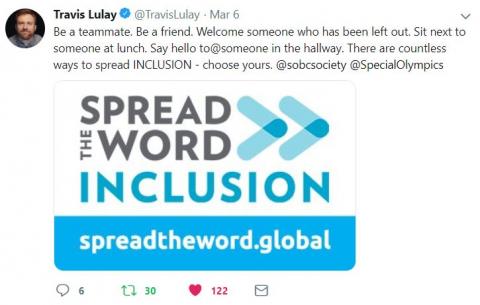 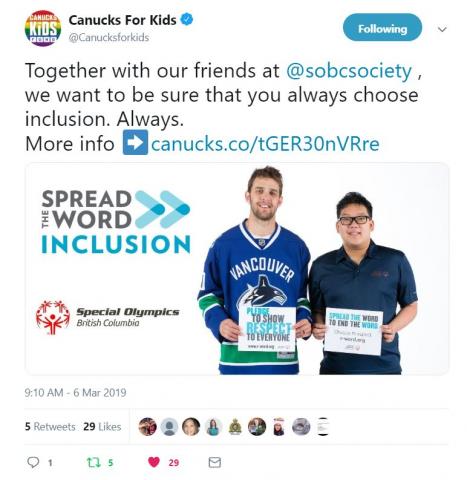 The Victoria HarbourCats Baseball Club announced their inclusive game against SOBC – Victoria’s national silver medal-winning softball team on the Spread the Word: Inclusion day, saying, “We could not be more proud to have this opportunity to play our Special Olympics friends on our field.”

And inspiring grassroots events and pledges of inclusion happen throughout the province throughout the year. In B.C. schools and communities on and around the 2019 awareness day:

SOBC coach and youth champion Roshan Gosal has sought to engage all B.C. schools and in his hometown of Abbotsford, he annually works with volunteers in all of the 11 high schools and local athletes to run the campaign in every school. They also have the support of their local Mayor as well as the University of the Fraser Valley. Read about their success in recent years where they have attracted more than 6,000 pledges of respect to date.

This month, Gosal is being joined by SOBC – Abbotsford athlete Austin Johnston and SOBC – Chilliwack coach and volunteer Wayne Williams to participate in the 2019 Special Olympics Global Youth Summit in Abu Dhabi, being held March 14 to 18 alongside the 2019 Special Olympics World Summer Games. Gosal, Johnston, and Williams will travel to Abu Dhabi to join a cohort of Special Olympics Youth Leaders from around the world, all committed to a vision of a global Unified Generation. Read more about their participation with a Spread the Word: Inclusion project

Following the Summit, Gosal and Johnston will bring their training back to Canada to expand the Spread the Word: Inclusion campaign. They wish to push this campaign into the nearby universities and communities. Using the campaign and the power of sport, Gosal and Johnston plan on growing the Unified Generation in a major way. We can’t wait to see what they’ll bring back and achieve next!

Spread the Word: Inclusion will continue to make a difference in schools, communities, and workplaces throughout the province year-round!

On March 27, our friends from motionball will lead their #NoGoodWay campaign to help end the hurtful use of the R-word and continue the call for inclusion and respect for people with intellectual disabilities.

Medals and personal bests matter to Special Olympics BC athletes, but they also fight for the right to be treated fairly and with respect: