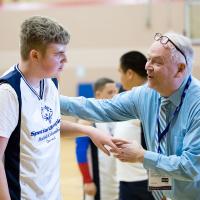 We are excited to announce the Special Olympics BC basketball and figure skating athletes and coaches who will take part in the Kamloops 2018 BC Winter Games being held February 22 to 25.

More than 1,700 participants and another 1,600 volunteers will be in Kamloops as the BC Games celebrate their 40th anniversary.

We’re excited to cheer on the SOBC athletes as they hit the hardwood and the ice competing in Special Olympics events!

The BC Winter Games provide a competitive multi-sport environment that supports the development of athletes, coaches, and officials as they move on to higher levels of competition.

SOBC athletes have been showcasing their skills in the generic BC Games for 16 years, competing in Special Olympics divisions. Prior to 2014, SOBC athletes at BC Games competed in athletics and swimming. Their expansion into BC Winter Games began in 2014 with basketball and continued in 2016 with the addition of figure skating.

These integrated competitive opportunities give SOBC athletes chance to shine in front of their peers from generic sports, says Competition and Youth Coordinator Joanie Hayes.

“The BC Games offer an excellent platform for SOBC athletes and coaches to compete and gain valuable experience on a bigger stage,” says Hayes. “It’s a great place to showcase their skills as they participate alongside the mainstream athletes. The atmosphere at the BC Games is one of inclusion, something we strive for every day with our year-round programs.”

“The biggest thing is just getting the chance to compete and show your program to the world and getting a chance to just do what you love,” Walzak said in an interview.

Be sure to check results at BC Winter Games and check in to our social media for coverage of our athletes.