Flame serves as beacon of inspiration to thousands during Law Enforcement Torch Run to Kazan, Russia.

Lynette was one of 120 members of the law enforcement torch run and Andrew was one of only 10 Special Olympics athletes that were selected for the 2022 Kazan Final Leg Torch Run Team. What a wonderful accomplishment!

The Law Enforcement Torch Run® Final Leg for the 2022 World Games will take place from 9 January – 22 January 2022.  A team of 120 team members which includes 96 law enforcement officer runners, 10 Special Olympics athletes, and logistics personnel – will serve as Guardians of the Flame as they run the Flame of Hope throughout Russia. The Final Leg event and community visits will raise excitement for the World Games throughout the country.

The Law Enforcement Torch Run® for Special Olympics (LETR) is Special Olympics’ largest grass-roots fundraiser and public awareness vehicle in the world. Nearly 110,000 law enforcement members in all 50 U.S. States, 12 Canadian provinces/territories, and 44 countries contribute to LETR efforts annually as Guardians of the Flame®, ensuring the delivery of the Special Olympics Flame of Hope to the Opening Ceremony of local Special Olympics competitions, state/provincial Games, and national/regional Games.

For more information on the Final Leg team and the members participating, please visit www.letr-finalleg.org

The Special Olympics World Winter Games are among the world's most prestigious sporting events and are focused on advancing a truly inclusive world for people with intellectual disabilities. The World Games also provide a prominent platform for the movement's work in health, education, and leadership for athletes. For more information:  https://sokazan2022.com

Kazan is Russia's capital of sports, a city with a thousand-year history, one of the country's largest economic, scientific, and cultural centres, a melting pot of diverse cultures, ethnicities and traditions, and an exciting new destination for Special Olympics.

The Special Olympics World Winter Games 2022 will mark the first time the organization has brought a global competition to Russia. No stranger to major sports events, Kazan has played host an array of top sports competitions, including the 2013 Summer Universiade, 2015 FINA World Championships and the 2018 FIFA World Cup. 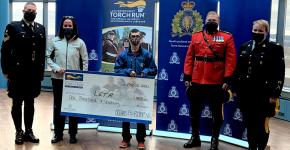