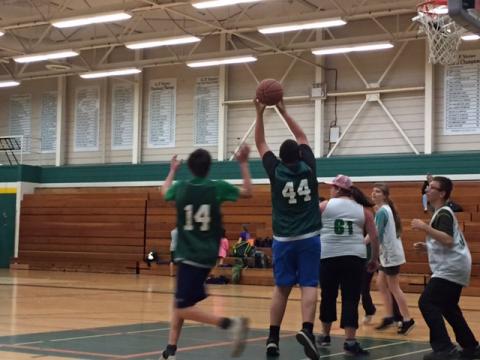 Comox Valley and Nanaimo student-athletes with intellectual disabilities took centre stage on May 26 in the inaugural Special Olympics BC Vancouver Island 3-on-3 Basketball Tournament, marking an exciting and inspirational beginning to SOBC school sport competition!

After weeks of training, the participating student-athletes from Comox’s G.P. Vanier and Mark R. Isfeld Secondary Schools and Nanaimo’s Dover Bay and Wellington Secondary Schools hit the court in Vanier ready to compete and give their all in the round-robin tournament. The five teams impressed with their tireless play, abilities, and enthusiasm, and their sportsmanship was second to none.

The student-athletes also inspired enthusiastic support from their schools and families. The Vanier gym was rocking with cheering spectators and even the Isfeld and Vanier mascots joining the fun!

The student-athletes wore their school jerseys and did their schools proud. While all received ribbons for their outstanding participation, at the end of the day the tournament champion plaque went home with Nanaimo’s team of combined student-athletes from Dover Bay and Wellington.

Isfeld student-athlete Logan Kalnicki said he felt the tournament was “pretty amazing.” He and his teammates practiced twice a week in preparation for the event, and had fun practicing their skills including dribbling and shooting.

At the tournament, Kalnicki said, it was fun to wear the uniform and great to be out there with friends and watch his friends sink baskets. He also had awesome family support as his mother, grandmother, and brother had the opportunity to come watch and cheer for him and his team.

“One of the most fun things you can ever imagine is doing the tournament,” Kalnicki said.

His mother Alison said it was exciting to see his improvement in basketball through the weeks of training, and to see him developing a great bond with his teammates as they worked toward the same goal.

At the tournament, she added, “he had a grin on his face the whole time.” She also admired how hard all the athletes worked throughout the full day of full-on play.

Tournament Coordinator Randy James, who is both Isfeld’s Work Experience Program Coordinator and the Special Olympics BC – Comox Valley Local Coordinator, led the planning of this amazing day. The event benefitted from outstanding support from staff from both school districts, including the much-appreciated efforts of Vanier Athletic Director Richard Murphy, as well as terrific volunteer refereeing and scorekeeping by Vanier students led by Head Referee Riley Meyerhoff.

Meyerhoff, a Grade 11 Vanier student and player on the senior boys team, took on the role of coaching the Vanier teams in their weekly practices, and then contributed hours of refereeing at the tournament. He said the student-athletes showed lots of improvement through the weeks of practice, and they were “super supportive” of each other and sportsmanlike throughout both the practices and the tournament.

“One thing I really appreciated was all these kids’ parents were out, and for a lot of them it was the first time they got to see their kids participate in sports like this … excelling in a sport and having a great time,” Meyerhoff said. And the energy of the players was fantastic: “They were all laughing and smiles the whole time, they were super into it,” he said.

While the players showed impressive sportsmanship and encouragement of each other, Meyerhoff said, they also showed competitive determination.

“They definitely wanted to win. When they were playing other teams at the tournament, they were trying their hearts out and wanted to win,” Meyerhoff said.

“It’s a great way to showcase the athletes’ ability and get the message out and word out about Special Olympics, what we offer in the community,” James told the Comox Valley Record. “And for some of the athletes who would otherwise not receive the opportunity to do these types of events, it allows them to showcase their skills in front of their peers at the high school level.”

Kalnicki and a handful of the other student-athletes in the 3-on-3 basketball program are former participants in the SOBC – Comox Valley FUNdamentals program, and several others have participated in other Special Olympics sports previously.

“The 3-on-3 basketball tournament was a huge success at G.P. Vanier Secondary School. Spectators cheering, a giant mascot leading the charge, and players giving all they have for the fun of the game – who could ask for anything more?” Comox Valley School District Superintendent Dean Lindquist wrote in an email. “Thank you to Special Olympics BC, Randy James, athletes, officials, and spectators for making the 3-on-3 basketball tournament such a huge success.

“It is wonderful to see athletes giving their best in competition, yet showing great sportsmanship both on and off the court. We look forward to our student athletes competing next year.”

The fun didn’t stop with the end of the tournament: The Vanier and Dover Bay team members were recognized for their accomplishments in their schools’ year-end athletic banquets alongside fellow student-athletes.

Vanier Teaching Staff member Krista Ogilvie said that the materials, encouragement, and support provided by Special Olympics BC made it a pleasure to participate, and she commended the participating students.

“It was such a joy to watch the players achieve a goal. To see our students demonstrate persistence, teamwork, commitment, leadership, and sportsmanship was thrilling. I am so happy for them. I believe they felt "a part" of a school culture more than ever before,” Ogilvie wrote in a comment after the tournament. “I am overwhelmed at the positive response from parents, teachers, support staff, and admin. I am inspired to the extreme and can't wait till next year!!”

The action continued on June 7 with the inaugural SOBC School District 68 School Sport Competition Track Meet, where 66 students from Nanaimo Ladysmith Public Schools took to the track for a terrific day of racing! It was wonderful to see this many athletes out and there were many impressive performances, including some surprise breakouts that thrilled observers.

Any schools across the province who are interested in getting into SOBC school sport competition programs are invited to contact Leslie Thornley, SOBC Manager, Sport, Coaching & Youth Development, by email or by phone at 250-317-1272 / 1-888-854-2276 toll-free.