On March 7, people across North America demonstrated their commitment to the 10th annual international Spread the Word to End the Word awareness day campaign.

The event encourages everyone to take the pledge to end the hurtful use of the R-word and choose respect for people with intellectual disabilities.

Since its inception a decade ago, more than 763,900 people have signed to take the pledge. While progress has been made, there's still work to be done.

At r-word.org, thousands of people have shared their experiences of how the R-word negatively affects their lives and what they’re doing to end its use.

This year alone, more than 40,000 people have taken the pledge online.

In addition to the grassroots events happening year-round in schools and communities throughout the province, SOBC and our supporters share messages of respect and understanding through social media on and around the Spread the Word to End the Word awareness day, reaching thousands of followers.

Many celebrities, SOBC sponsors, sport organizations, and individuals help spread the word through posts and shares.

Some inspiring messages from our respected SOBC supporters: 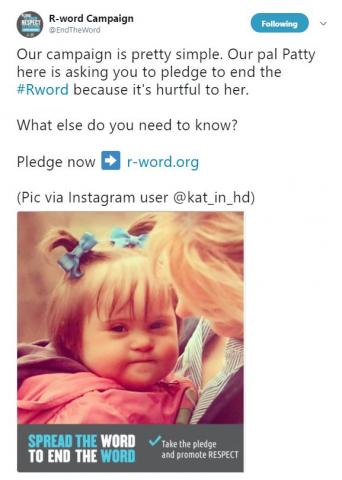 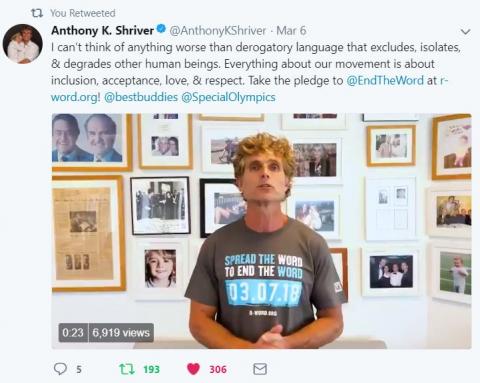 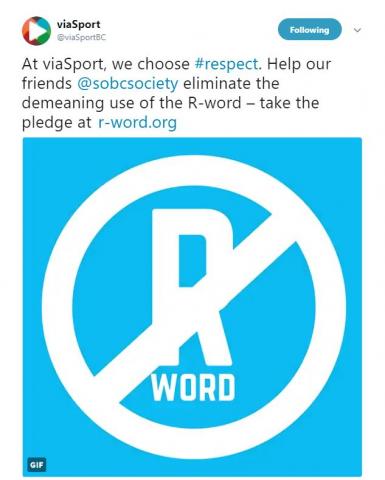 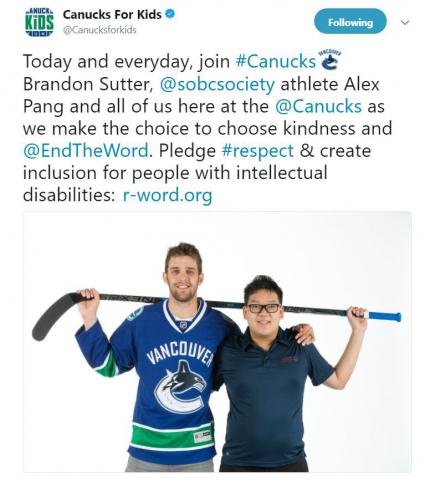 Thanks to our friends at Vancouver Whitecaps FC and the Vancouver Canucks who have been long-time supporters.

Across Canada, supporters pledged to end the R-word and joined motionball in saying there’s #NoGoodWay to use the R-word. motionball has joined the movement with their #NoGoodWay campaign and many champions across Canada took up the call this year. 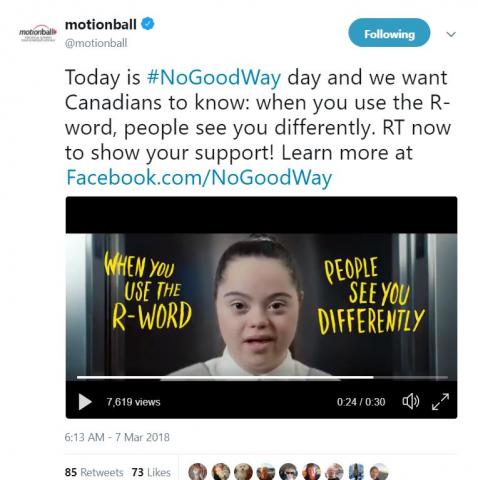 Although the use of the R-word still exists and more acts of inclusion need to be encouraged, teens are having more connections with people with intellectual disabilities in school and in their neighborhoods, breaking down stereotypes and perceptions that exist for people with disabilities.

Several American studies from The Harris Poll conducted over the last decade help provide a better picture of the use of the R-word by adults and teens, inclusive behaviors and overall acceptance of people with intellectual disabilities.

Some of the key findings include:

•    Reinforcing respectful language: The growth in more compassionate positive responses when hearing the R-word is slightly more pronounced when the person being picked on has intellectual disabilities. Seventy per cent of teens say they told the person it was wrong to say the R-word, compared to 48 per cent in 2008. Virtually no one said they didn't care or joined in, a significant drop from 2008 numbers of 12 per cent and four per cent, respectively. When looking at adults standing up for respectful language, only 63 per cent of adults told the person it was the wrong thing to say.

•    Outdated attitudes of the ‘R-word’: Nearly three in 10 teens (27 per cent) and four in 10 adults (38 per cent) still think that there's nothing wrong with using the word "retarded" to describe a thing or situation (as opposed to a person).

•    Did you know the increasing use of the R-word in today’s society further perpetuates the stigma and negative stereotypes that face people with intellectual disabilities?

•    Special Olympics is leading a global youth movement via a new marketing campaign aimed at shifting the public’s misperceptions about the organization and people with intellectual disabilities. Through marketing activations and events, we will be challenging the youth of the world to become the first unified generation – one that champions inclusion and unity through activities where individuals with and without intellectual disabilities participate together. We are empowering youth to make a change in their communities. Visit www.r-word.org to see how you can make a change.

•    Up to three percent of the world’s population have intellectual disabilities - that’s almost 200 million people around the world. It’s one of the largest disability populations in the world

•    Special Olympics’ Multi-National Public Opinion Study of Attitudes toward People with Intellectual Disabilities, conducted by Gallup, reveals that throughout the world, over 60 percent of people still believe that people with intellectual disabilities should be segregated in schools and in the workplace. This is intolerable. We need massive attitude change now to attack and reverse the stigma that is destructive to the lives of people with intellectual disabilities and a barrier to growth.

•    In Maria Shriver’s recent national report, titled The Shriver Report Snapshot: Insight into Intellectual Disabilities in the 21st Century, findings reveal that although young Americans have more progressive attitudes toward and expectations for people with intellectual disabilities, young Americans, especially men, find using the word ‘retard’ acceptable for many when used to tease friends or oneself, not in reference to people with a clear intellectual disability.

What it's all about

Through engagement with schools, organizations, and communities, the Spread the Word to End the Word campaign is a tool for young people around the world to take a stand in their own communities and help change the conversation by eliminating the use of the R-word and replacing it with respect.

The campaign highlights the harmful effects the word “retard(ed)” has on the millions of people with intellectual disabilities and their families and friends.

Use of the R-word, “retard” or “retarded,” is hurtful and painful and, whether intended or not, is a form of bullying. It is the same as any slur used against any minority group.

Eliminating the use of this word is a step toward respect for all.

Led by Soeren Palumbo and Tim Shriver (son of Special Olympics Chairman Timothy Shriver), the campaign evolved out of a united passion to promote the positive contributions people with ID make in communities around the world. It was combined with a simple call to action to take the pledge and has inspired thousands of K-12 schools and universities across the country to hold rallies enlisting young people to take the pledge.

To date, more than 763,900 people have taken the pledge online to end the use of the R-word and millions more have signed banners and petitions throughout the world. Globally, supporters continue to use the Spread the Word to End the Word campaign to advocate on behalf of those with intellectual and developmental disabilities and to work to make our society more inclusive.