Champions of respect ending the R-word

On and around March 1, Special Olympics champions throughout the province and around the world spoke out in support of the ninth annual Spread the Word to End the Word® awareness day. Champions of inclusion and dignity for individuals with intellectual disabilities use this inspiring campaign and the international awareness day to help stop the hurtful use of the R-word and rally people to pledge respect at r-word.org.

In addition to the grassroots events happening year-round in schools and communities throughout the province, SOBC and our supporters share messages of respect and understanding through social media on and around the Spread the Word to End the Word awareness day, reaching thousands of followers. Many celebrities, SOBC sponsors, sport organizations, and individuals help spread the word through posts and shares.

Check out some of the inspiring messages of respect by SOBC supporters: 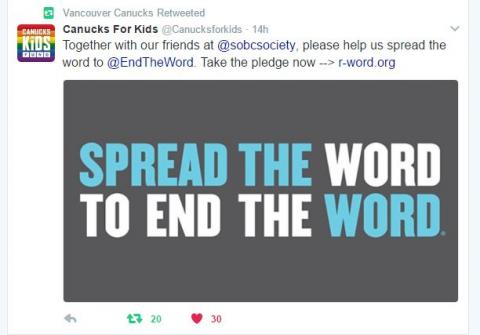 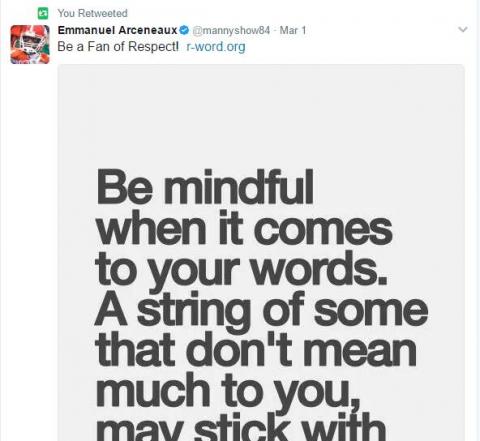 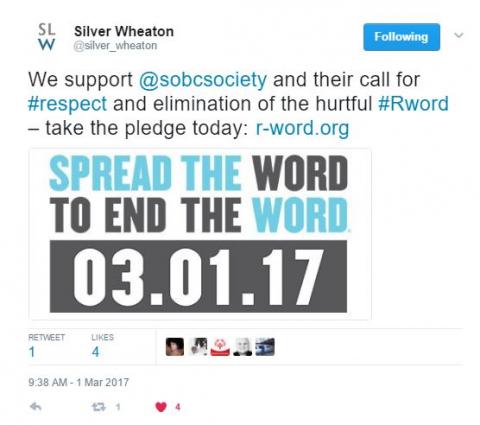 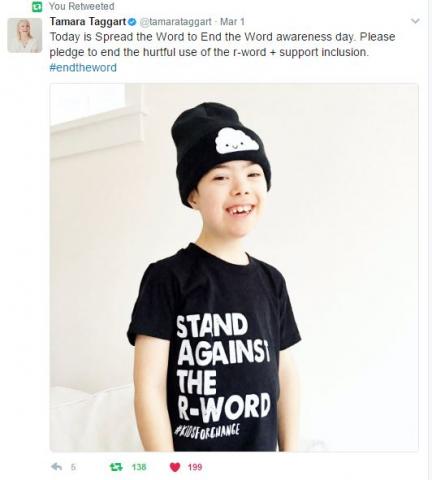 A post from SOBC athlete Ashley showing why this campaign matters:

“I’m taking a stand to explain why not to use that word and use Respect instead. Every time I hear someone use that word around me or around others with special needs, it hurts because it’s very offensive, hurtful, and it’s like you don’t want to get to know me or others who have a disability,” she wrote. “One of my favorite sayings is Don’t Judge A Book By Its Cover. Which is very true. So the next time when you use the word Retarded, I want you to think of me and many others who have a disability. We are just like everyone else – we want to be loved, respected and included. I challenge everyone, if you hear someone use the R-word, to tell them how hurtful it is to people who have special needs.”

In Abbotsford, SOBC coach and youth champion Roshan Gosal is working with volunteers in all of the 11 high schools and local athletes to run the campaign again in every school.

They have the support of Abbotsford Mayor Henry Braun for the second year running. Gosal is now a student at the University of the Fraser Valley, and this year he gained the support of UFV and President Dr. Mark Evered in pledging respect. Gosal is also reaching out to every high school in B.C.! Please click here to read the latest update on the R-word events organized by Gosal and team.

Thanks to our friends at Vancouver Whitecaps FC, SOBC also had the opportunity to invite pledges of respect with awareness booths at their season opener on March 5. 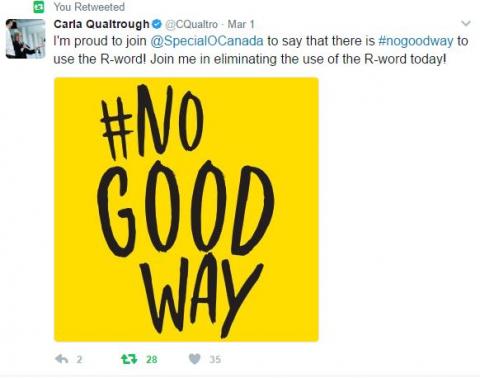 Across Canada, supporters pledged to end the R-word and joined motionball in saying there’s #NoGoodWay to use the R-word. motionball has joined the movement with their #NoGoodWay campaign and many champions across Canada took up the call this year.

cere thanks to everyone who helped raise awareness and promote respect on and around Spread the Word to End the Word awareness day! r-word.org

On March 1, Special Olympics International released studies showing that a lot of progress has been made over the last nine years in promoting inclusion for all and changing attitudes and perceptions about people with intellectual disabilities. Teens, specifically, are standing up for inclusion and respect for all at school and in their communities. However, it appears that adults are aware of the R-word but are not as active in promoting inclusive behaviours.

Although use of the R-word still exists and more acts of inclusion need to be encouraged, teens are having more connections with people with intellectual disabilities in school and in their neighbourhoods, breaking down stereotypes and perceptions that exist for people with disabilities.

Several American studies from The Harris Poll conducted between 2008 and 2017 help provide a better picture of use of the R-word by adults and teens, inclusive behaviours and overall acceptance for people with intellectual disabilities.

Some of the key findings include:

“Teens embracing inclusion and advocating against the demeaning and dehumanizing use of the r-word are spreading a new conversation of acceptance, friendship, and empowerment,” said Soeren Palumbo, co-founder of the Spread the Word to End the Word campaign. “These agents of inclusion are re-writing the youth experience to no longer exclude people with intellectual disabilities but to include them as peers, teammates, and friends. The movement happening in our school hallways is gaining traction and pace to create a more inclusive society -- and we will all be better for it.”

Through engagement with schools, organizations and communities, the Spread the Word to End the Word campaign is a tool for young people around the world to take a stand in their own communities and help change the conversation by eliminating the use of the R-word and replacing it with respect. The campaign highlights the harmful effects the word “retard(ed)” has on the millions of people with intellectual disabilities and their families and friends.

Use of the R-word, “retard” or “retarded,” is hurtful and painful and, whether intended or not, is a form of bullying. It is the same as any slur used against any minority group. Eliminating the use of this word is a step toward respect for all.

The Spread the Word to End the Word grassroots campaign was created in February 2009 by youth who participated in the Special Olympics Global Youth Activation Summit, held in conjunction with the Special Olympics World Winter Games in Idaho, USA. Led by Soeren Palumbo and Tim “Timbo” Shriver (son of Special Olympics Chairman Timothy Shriver), the campaign evolved out of a united passion to promote the positive contributions people with ID make in communities around the world. It was combined with a simple call to action to take the pledge and has inspired thousands of K-12 schools and universities across the country to hold rallies enlisting young people to take the pledge.

To date, over 650,000 people have taken the pledge online to end the use of the R-word and millions more have signed banners and petitions throughout the world. Globally, supporters continue to use the Spread the Word to End the Word campaign to advocate on behalf of those with intellectual and developmental disabilities and to work to make our society more inclusive.