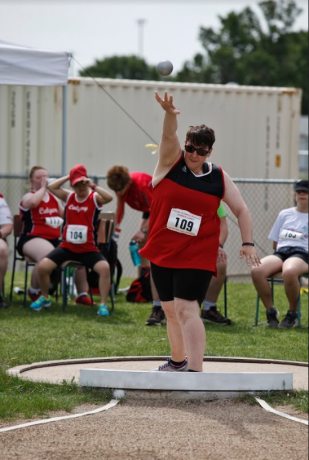 Growing up with an intellectual disability, Calgary’s Leonka Kaluha felt judged and bullied.

Throughout high school, she was told she wasn’t fast enough or coordinated enough for sports.

“I would shuffle my feet and hang my head to the ground,” Leonka, now 34-years-old, recalled of her younger self.

When she was 18-years-old, she signed up for a number of sports programs with Special Olympics Alberta. Seventeen years later she’s still a valued member of Special Olympics Calgary’s floor hockey, bocce and track and field teams, has a collection of medals and circle of friends to prove it.

“You don’t get judged (at Special Olympics) and they praise you on what you can do,” she said. “Now I walk with my head up.”

According to her foster mother, Marilyn Ritchie, Leonka is “a totally different person than she was prior to Special Olympics.”

“She would always say how she hated herself because she had a disability - there wasn’t anything I could say to make it better,” Ritchie said. “Once she had been in Special Olympics a good number of years I noticed that she was no longer saying that.”

“To see the difference that it’s made in Leonka’s life, it just overwhelms me.”

Leonka started taking part in every Special Olympics activity she could, from motionball’s Marathon of Sport to volunteering at various fundraising campaigns.

In September 2018, she volunteered to visit her local Sobeys to share her story at the grocery chain’s first-ever in-store fundraiser in support of Special Olympics programs across Canada, which raised more than $700,000.

Leonka made a lasting impression on the store staff and was hired on the spot. She’s been working as a Courtesy Clerk ever since.

Sobeys also built her work hours around her already busy schedule, so she can still attend Special Olympics practices and competitions as well as her art class.

“There isn’t a day that I don’t pick her up from work that she doesn’t tell me how much she loves her job,” Ritchie said. “Sobeys has become such an amazing champion for athletes.”

On June 20, Sobeys kicked off its second in-store fundraiser in support of Special Olympics across Canada. This year’s goal is to raise $1 million.

You can help transform the lives of Canadians with an intellectual disability like Leonka by making a $2 donation when you check out with your groceries at your local Sobeys, Safeway, IGA, Urban Fresh, Foodland or Thrifty Foods until July 3.

In just three years, this 17-year-old snowshoer has gained confidence – and a spot on Special Olympics Team Saskatchewan 2020
Saskatoon’s Madalyn Gramiak has spent many years cheering for her older sister on the soccer field. Now that she’s a Special Olympics Saskatchewan athlete, it’s Madalyn’s turn to be the “superstar” in the family.
View More