She’s been involved with Special Olympics PEI for more than 20 years, first as a volunteer, then Program Director and now leads the Chapter.

She’s attended countless Provincial and National Games as well as three Special Olympics World Games – soon to be four, when she serves as chef de mission for Special Olympics Team Canada 2021 at the World Winter Games in Sweden.

“The chef position has always been on my radar,” Sheehan said.

While World Games are “long days and short nights,” it’s an experience she loves.

“Games are just so dynamic, so fun,” she said. “It’s where you really see the culmination of what you do in your little Chapter, in our case in PEI, on the world stage and how you’re connected to the bigger movement.”

Sheehan primarily sees the chef role as a support person for every team member.

“What I want to accomplish out of this is to ensure everyone has the tools necessary to have a successful run – whatever that means to them,” she said. “Anything they need to just grow as human beings and have a really fun journey as we get to Sweden and beyond.”

Individual and team growth – for both athletes and coaches – is her favourite part of World Games.

“From when they get selected, to the World Games experience – there’s such a transformation,” she said.

One of her favourite Games moments was watching a snowshoe athlete come out of his shell at the Special Olympics World Winter Games Korea 2013.

Throughout training camps and the lead up to competition, the athlete kept to himself, often reading a book. When they arrived in Korea, many locals wanted to take pictures with him, because – at more than six-feet tall – he was “twice their size.” At first he was hesitant, but by the end of the trip he was jumping in photos and making peace signs with the locals and trading pins with athletes from across the globe.

“He took that step outside his comfort zone and it wasn’t as scary as he perceived it to be and because of it he had just a wonderful experience – the culture and just socially,” Sheehan recalled.

“It’s such an amazing experience – and it’s a scary experience for a lot of athletes – for a lot of coaches too,” she said.  “Move outside of your comfort zone a little bit at a time. Don’t be scared of change – it’s going to occur, because it’s just such a phenomenal experience.”

“Ask for help, enjoy the journey and have a ton of fun doing it.” 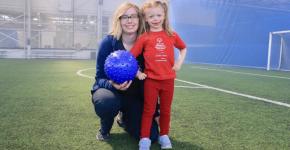 Global Day of Inclusion leads to second award-winning Special Olympics Donut at Tim Hortons
28
May, 2020
For the second year in a row, Special Olympics Canada...
END_OF_DOCUMENT_TOKEN_TO_BE_REPLACED

Special Olympics Canada launches online tool to track health and fitness while at home
16
May, 2020
Originally created for Special Olympics Team Canada to track workouts and nutrition as they train for World Games, the tool is now available for all athletes and coaches, so they can stay active and connected as physical distancing continues.
END_OF_DOCUMENT_TOKEN_TO_BE_REPLACED
Donate