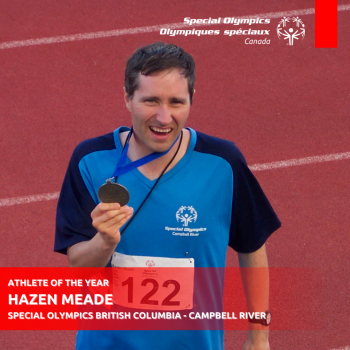 Hazen has earned 16 medals at National Games and brought home 2 medals for Team Canada while competing at World Games. During the pandemic, Hazen been taking part in SOBC’s Provincial Challenge Games – a 7-week virtual physical activity challenge that encourages athletes to get physically fit and participate in healthy behaviours to earn points for their regional teams.

Hazen has been an outstanding participant, averaging more than 74 points each week. Always eager to support his teammates on and off the track, he has recently been helping fellow athlete, Ashley Adie, with her training for Special Olympics World Games 2022. Hazen sets an amazing example of the true spirit of teamwork. 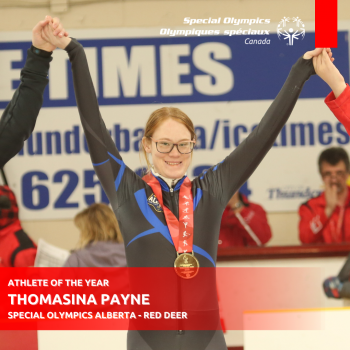 Meet Thomasina Payne: For the past 18 years, Thomasina has competed in curling, athletics and speed skating.

In 2020, Thomasina was named to Special Olympics Team Canada Training Squad for the World Winter Games 2022 in Kazan, Russia. Thomasina actively participates in the virtual Alberta PEAK Program to stay healthy, fit and connected. Thomasina is known for being very encouraging and supportive of her fellow athletes. Over the years, she has enthusiastically taken on the role of training partner for athletes going to National and International Games, even when she did not qualify herself.

As an Athlete Ambassador, she has spoken to hundreds of people from the business community, schools, and the general public at Special Olympics Alberta and SOA-Red Deer fundraising events.

Congratulations to Special Olympics Athlete of the Year, Thomasina Payne! 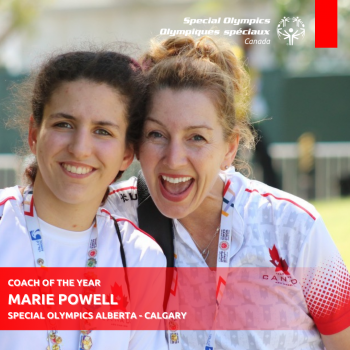 Meet Marie Powell, one of Special Olympics Canada’s Coaches of the Year. Marie originally started coaching athletics with Special Olympics during her university years, as part of the volunteer portion of her degree.

She’s now been a coach for more than 15 years, helping athletes achieve personal bests at the provincial, national and world level. She’s currently an Assistant Coach of Snowshoe for Special Olympics Team Canada 2022.

Throughout the pandemic, she has been leading her Special Olympics Team Canada Training Squad members through virtual training, while also taking a lead role in Alberta's PEAK Program – by not only leading workouts for athletes on Facebook live, but also created templates for her fellow coaches to get involved in the sessions. While she was taking the time to create and help facilitate the PEAK Program, she also initiated the virtual Calgary

Snowshoeing program which, due to its success, led to the roll-out of similar virtual programming for other winter sports. 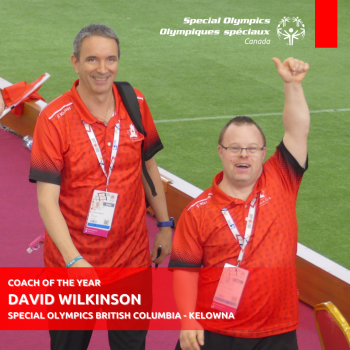 Meet David Wilkinson, one of Special Olympics Canada’s Coaches of the Year. After 18-years as a Special Olympics coach in bocce and snowshoe, David’s long list of accomplishments includes being the Assistant Coach for Special Olympics Team Canada in 2017 and recently being selected to attend the Special Olympics World Winter Games, being held in Kazan Russia in 2023.

For David, supporting Special Olympics has become a family affair. His wife, Paola, and son, Ty, also coach for Special Olympics. His other son, Tony, is an accomplished athlete who will also represent Canada at the next World Games, alongside his dad.

This past year, David stepped up to the plate to pilot one of the first in-person programs that begun in July and August 2020. He worked hard to ensure the safety of all his athletes and volunteers through careful consideration to all return to sport training, safety guidelines and protocols. The program ran incredibly well, and both the athletes and volunteers were elated to be safely together, back on the playing field.

Congratulations on being named Coach of the Year, David! 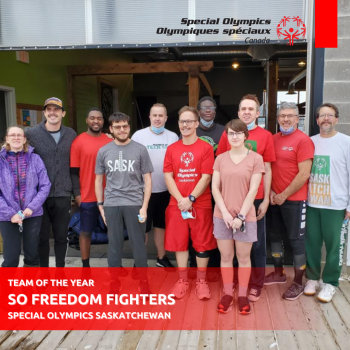 When the pandemic put a pause on in-person programming, this soccer team decided to pivot and become a virtual cross-training group. Coaches Rob Belanger and Larry Fast began to experience the positive impact that the online sessions were having on their athlete’s mental and physical health, they decided to open it up province-wide.

What originally started as a group of 10, is now a 21 member team that has met every week for the past 18-months. The athletes have truly come together as a team, by supporting each other mentally and challenging each other physically. Each athlete is incredibly driven – always striving to achieve their best, while cheering each other on.

They leave each weekly session with a sense of achievement and a smile on their face. Volunteers, family members and caregivers have all begun to join in on the hard work and fun. Although they may have come together under unique circumstances, the positive attitudes, hard work, shared goals and comradery of all participants is what makes them unmistakably a team – and greatly deserving of being Special Olympics Canada Team of the Year. 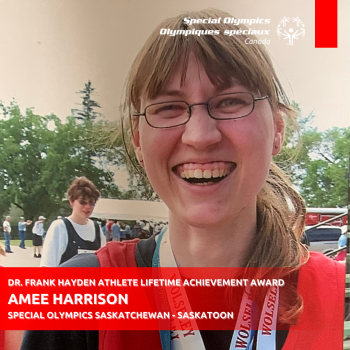 Meet this year’s Dr. Frank Hayden Athlete Lifetime Achievement Award Winner: Saskatchewan’s Amee Harrison. Named after Canada’s Dr. Frank Hayden, this award goes to a Special Olympics athlete who has exemplified the spirit, philosophy and goals of the movement over the course of their career.

Amee has been a dedicated Special Olympics athlete for the past 27 years. She participates in athletics, bocce and equestrian programs. Since her first Provincial Games in 1994, Amee has taken home many bronze, silver and gold medals from the Provincial and National level. Amee’s involvement in Special Olympics has gone beyond her athletic aspirations.

She participated in the Athlete’s Speakers Bureau and her local Leadership University to learn how to effectively tell her story to share the benefits of Special Olympics as a the keynote speaker at many fundraising events.

Please join us in congratulating Amee Harrison, a passionate advocate on behalf of her peers and the entire Special Olympics movement, as our 2021 winner of the Dr. Frank Hayden Athlete Lifetime Achievement Award. 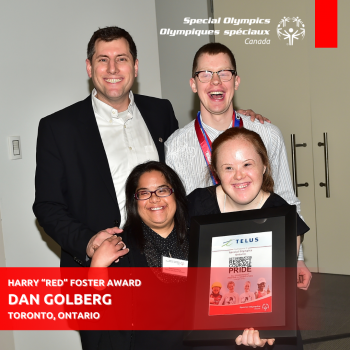 Each year, the Special Olympics Canada Harry “Red” Foster Award is presented to someone who, like Mr. Foster, has contributed significantly to the development, awareness and success of Special Olympics across the country.

Ontario’s Dan Golberg has done just that for more than 12 years. Dan first joined Special Olympics Canada Board of Directors in 2009 as Vice-Chair, playing a lead role in the development of a five-year Pan-Canadian strategic plan for the movement. Throughout his time on the Board, Dan also became a key member of the Steering Committee that oversaw the development of the first Pan-Canadian Fundraising Strategy and National Individual Giving Program.

Dan has been a huge champion of the Special Olympics Canada LIMTLESS Gala since 2013, and a key factor in the success of the fundraising event year after year. After completing his term on the SOC Board in 2017, he joined the SOC Foundation Board, where he continues to create impact to this day. A strong believer in the transformative power of sport and the Special Olympics mission, Dan has strongly contributed to the movement in Canada. 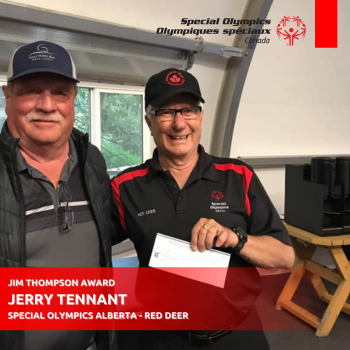 Jerry Tennant has been a mainstay for 40 years with Special Olympics Red Deer – the past 30 as Chair and Program Director. Jerry contributes to all aspects of the organization including chairing meetings, organizing fundraising events and competitions, securing facilities for 13 sports, recruiting and training coaches and many other aspects of administration.

Since getting involved, Jerry's leadership has resulted in a 300 percent increase in the number of athletes and volunteers in the local program – creating opportunity and unlocking the potential of thousands of athletes. The quality that sets Jerry apart is his leadership and passion for supporting people with disabilities.

He has great pride in his local program and athletes, but he continually goes above and beyond to support the growth of Special Olympics throughout the province. 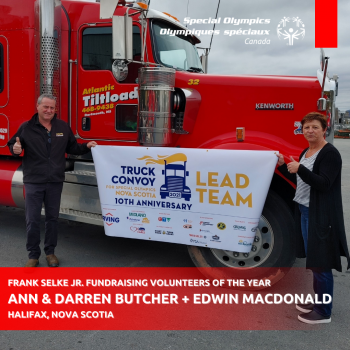 A family-owned business and transportation leader in Canada, Ann and Darren Butcher have been supporting Special Olympics for over 15 years.

When approached to support the establishment of the Big Rigs, Big Hearts Big Results Truck Convoy, they were one of the first companies in Nova Scotia to step up and accept the challenge. Along with the support of their employees, they have held the position of lead truck or lead team for many of the 10 years of the event.

To support their team, the Butcher’s match dollar for dollar the funds raised by their drivers. This has resulted in over $80,000 raised. Through the encouragement of the Butchers, driver Edwin MacDonald began his journey with the Truck Convoy in 2016. He met Truck Buddy athletes Chris, Stacey and Kara who got him hooked.

Congratulations An, Darren and Edwin! 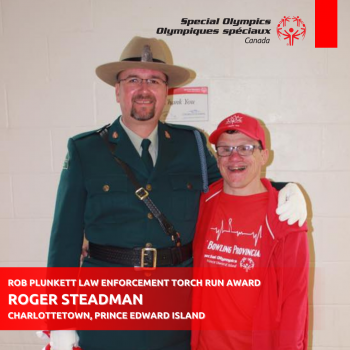