‘A perfect fit:’ Celebrating 35-years of TSN on the air – and supporting Special Olympics Canada

“Our relationship with Special Olympics Canada goes back to the very beginning of TSN in 1984,” said President of Bell Media Sales, Marketing and TSN, Stewart

Johnston. “I’m quite confident in saying we don’t have any other partnerships that go 35-years in our entire history.”

It was co-founders of The Sports Network, Gordon Craig and Jim Thompson, who spearheaded the station’s support of Special Olympics from Day 1.

“They really set the foundation for the company and that sense of goodwill and philanthropy has really carried forward,” said Johnston “We’ve all been touched over the years by the connection with Special Olympics. We love what these athletes represent.”

Longtime TSN personality and “the voice of curling,” Vic Rauter, has been supporting Special Olympics as a broadcaster before the network was even on the air.

He first got involved in the 1970s, when National Hockey League legends Lanny McDonald and Darryl Sittler asked him to do some announcing for a Special Olympics floor hockey competition.

Rick Chisholm, who served as TSN’s Executive Vice President of Programming and Production until he retired in 2012, was also introduced to Special Olympics well before his start with the network.

As a freelancer, he started out supporting the Sports Celebrity Festival – now known as LIMITLESS: The Special Olympics Canada Gala – in 1989. He helped edit footage of the fundraising event.

“It doesn’t take very long before you fall in love with the whole thing,” said Chisholm. “It was a work of pure passion and joy.”

When he started working at TSN in 1997, he took that passion with him.

“It was important – very important – that TSN stay involved,” he said. “First of all, it was a perfect fit for TSN – it’s sports for sports.”

According to Johnston, that passion has “never really faltered” over the past 35 years.

“We’ve had probably six Presidents, changes in leadership, multiple generations and the relationship has survived. It really speaks to the impact that this relationship has had on TSN,” he said. “Special Olympics is everything that’s wonderful about sport.”

While Special Olympics is engrained in TSN’s history, it’s also an integral part of its future.

Jesse Pollock of BarDown, TSN’s digital sports and pop culture platform, is one of the many up-and-coming personalities carrying the torch forward. 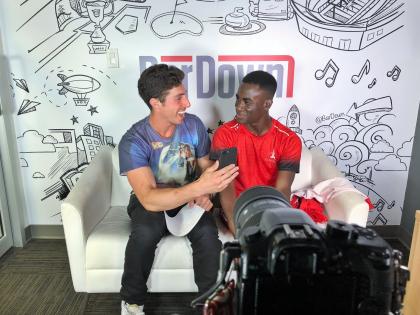 He recently invited Special Olympics Team Canada 2019 soccer player Eddie Nicks to the BarDown studio for an Instagram Live and he’s in the process of becoming a Special Olympics floor hockey coach.

“We can use our love of sport to help these athletes.”

Not only is working with Special Olympics athletes rewarding, “it’s just fun,” he said.

For Johnston, who’s been with TSN 20 years, it’s a point of pride to see the next generation engaging with the movement.

“I’m quite proud of Jesse, but I’m proud of us as well,” he said. “That’s the type of result, or success that comes from our long-standing relationship with Special Olympics.”