He was involved with the movement in PEI before the Chapter was officially founded in 1982.

“It wasn’t like it is now – it was just small,” Tommy, 56-years-old, recalled of those early days.

He was about 20-years-old when his mother encouraged him to try the unofficial program in the early 1980s. He tried floor hockey and was immediately hooked. He’s since tried every sport, but mainly focuses on floor hockey and softball.

With nearly four decades of Special Olympics competitions under his belt, retirement isn’t in sight for the veteran athlete. In fact, he’s gearing up for his 18th National Games in Thunder Bay, where he’ll compete with his floor hockey team at the Special Olympics Canada Winter Games 2020 in February.

“Special Olympics is basically a family,” said Tommy. “It got me to meet new friends and go different places.”

“As a coach, you go into Special Olympics thinking, ‘O.K., I’m going to help these guys and they need some support,’” Howatt recalled. “But Tommy and a couple of others really opened my eyes as to what they’re able to do, the skills and everything that they bring to the table.”

Over the years, Tommy became a natural leader and Howatt’s “go-to guy.”

“We rely on him to take that leadership role within the team and help coordinate, help run the warm-up and practice and communicate with the guys if there’s something we need to get out to them,” he said. “If he’s talking – the team will start to listen. He’s the role model that they all look to.” 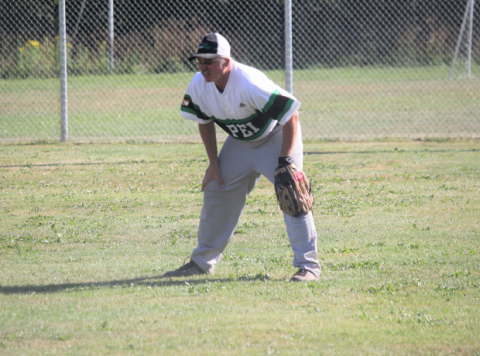 His leadership role extends beyond his teams and to the entire Special Olympics PEI athlete base. He sets an example by volunteering at fundraisers and community events, speaking at schools to promote the movement and living a healthy active lifestyle by training at the gym and maintaining a balanced diet.

“His role as ambassador for Special Olympics goes beyond the playing field,” said Special Olympics PEI Program Coordinator Genna Phelan. “His work ethic and determination matches all and age is no factor for him as he continues to be an example for the many generations following his footsteps.”

Coach Peter Howatt said he can’t think of an athlete more deserving of the prestigious award.

“He just exemplifies everything it means to be a Special Olympics athlete,” said Howatt. “The athlete’s oath – ‘Let me win, but if I cannot win let me be brave in the attempt.’ – he lives up to every word every time.”

Tommy will travel to Toronto with his wife Jennifer – who he met through Special Olympics – on November 14 to accept his award.