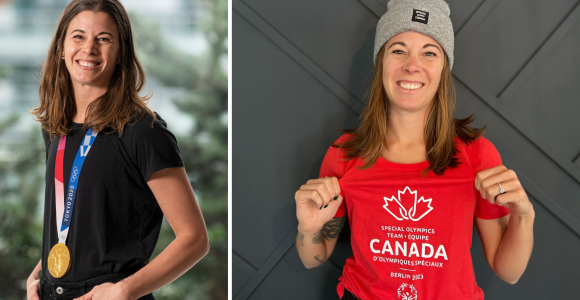 The past few unprecedented years have created a unique opportunity for this team. Due to the cancellation of programs and Games throughout the pandemic, athlete selection for the Special Olympics Team Canada Training Squad 2023 was not based on results at a Special Olympics Canada Summer Games. Instead, the athlete quota was distributed based on athlete registration at each Provincial/Territorial Chapter. Each Chapter hosted a variety of qualifying opportunities for athletes over the past six months, resulting in a truly Pan-Canadian team.

Former Canadian national team goalkeeper Stephanie Labbé (and newly named general manager of women’s soccer by the Vancouver Whitecaps) will be acting as the Honorary Coach for Special Olympics Team Canada. Labbé recently announced her retirement after an incredible career that saw her win two Olympic medals on the Canadian women’s soccer team. She will travel to Berlin with Special Olympics Team Canada for the nine-day competition, offering inspiration, insight and, of course, cheering on the team.

“I’m thrilled to be working with these inspiring Special Olympics Canada athletes leading into and during the World Games,” said Stephanie Labbé. “We know the impact that sport can have on individuals and communities and we have a unique opportunity to rally Canadians around this Pan-Canadian team.”

Training Camps will be held over the next 6 months to give athletes the opportunity to build the confidence and skills to train, compete and achieve their personal best. In November 2022 the first-ever Pan-Canadian team will come together in Toronto for a team training camp and advance preparation. 89 athletes along with their training coaches, will join the 49 Coaches, Mission Staff, Alternates and Leadership Team on the Special Olympics Team Canada Training Squad 2023. Athletes will be competing in 9 sports, including; athletics, basketball, bocce, tenpin bowling, golf, powerlifting, rhythmic gymnastics, soccer and swimming. For the first time ever, Special Olympics Canada is sending two all-women teams to compete – one in soccer and one in basketball.

“Special Olympics Team Canada is honoured to have the expertise, guidance and mentorship of Stephanie Labbé leading into, and at the World Games,” said Sharon Bollenbach, Chief Executive Officer, Special Olympics Canada. “Labbé is an incredible athlete, a longstanding supporter of the Special Olympics movement and a true champion of inclusivity in sport in every sense of the word. We are proud to have her support of our athletes as they represent Canada on the world stage.”

Established in 1974, the Canadian chapter of this global movement is dedicated to enriching the lives of Canadians with an intellectual disability through the transformative power and joy of sport. Operating out of sport clubs in 12 Provincial and Territorial Chapters, this grassroots movement reaches beyond the sphere of sport to empower individuals, change attitudes and build communities. From two-year-olds to mature adults, thousands of athletes with an intellectual disability are registered in Special Olympics year-round programs across Canada.