Connor’s Challenge: How Special Olympics built his confidence in sport – and in life

Connor Bissett has been facing adversity since diagnosed with autism at two-years-old.

Now 18, the Special Olympics Alberta swimmer has broken down barriers and stereotypes, by not only earning gold medals and qualifying for national competitions, but by taking on challenges out of the pool as well – like traveling and asking a girl to his 2018 prom.

Connor started with Special Olympics when he was 11-years-old. At the time, he struggled socially.

“He wasn’t very talkative,” said his mother Margo, also a Special Olympics swim coach. “He wouldn’t look the coaches in the eye, or people in the eye, so he was really shy.”

Over the past seven years, she’s watched him build confidence as a swimmer – starting with basic skills alongside others his age and progressing to an elite level, training with parachutes and weighted barrels to build his strength in the water. 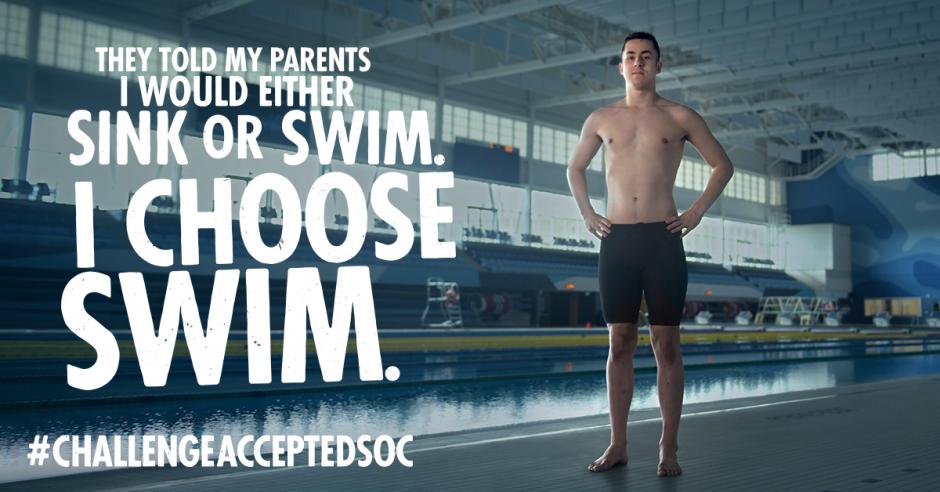 While he’s seen incredible success in his sport, Margo is even more grateful for the confidence Special Olympics helped him build outside of the pool – in his everyday life.

“He’s just come out of his shell,” she said. “He’s very social, he’s funny, he actually communicates with coaches – they can have a dialogue going back and forth.”
“As a parent, it means a lot to watch him grow as an individual every time he goes to practice, or a competition.”

He’s also made lasting friendships – not only in Alberta and across Canada, but around the world.

“He’s having a great life,” said Margo. “He’s happy, he’s outgoing. It’s just changed his personality, to know that he has a lot of people that like him.”

Connor is just one of many success stories at Special Olympics Canada.

Special Olympics helps build confidence to take on these challenges in sport – and in life, empowering Canadians with intellectual disabilities to live their full potential.

No matter the feat, Connor – like all 45,000 Special Olympics athletes – has the same fearless response: Challenge Accepted.

To help more children, youth and adults like Connor, make a donation to Special Olympics today.

“It helps everyone,” said Margo. “It helps people like Connor live a happy and healthy life. They can get out more and they’re not by themselves.”