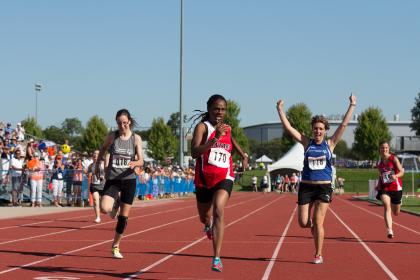 What is divisioning and how does it work?

The amazing difference that sets Special Olympics competitions apart from those of other sports organizations is that athletes of all ability levels are encouraged to participate.

Competitions are structured so that athletes compete with other athletes of similar ability in equitable divisions.

Step 1: Divide by gender.
Step 2: Divide by age (21 and under, 22 to 39, 40 and over). If there are not enough athletes in an age group to create meaningful competition, age groups may be combined.
Step 3: Divide by ability. Proceed on the premise that the recommended performance difference between athletes in a division is 25%.
Step 4: Divide number of athletes registered in an event.

For three or more athletes:

Place athletes into division of no less than three, no more than eight.

For two athletes entered into an event:

Athletes would compete against each other providing they are of the same gender.

For one athlete entered into an event:

For events that are not seeded, the athlete would be awarded a gold medal.

Step 1: Divide by gender.
Step 2: Divide by age (21 and under, 22 to 39, 40 and over). If there are not enough athletes in an age group to create meaningful competition, age groups may be combined.
Step 3: Divide by ability, using predetermined levels of ability as outlined in sport rules.

Figure Skating
If there are more than eight competitors in a level, athletes will be seeded by ability using their element scores.

Rhythmic Gymnastics
If there are more than eight competitors in a level a divisioning round will be run. Athletes will be placed in their final division according to their all round scores.

Maximum performance would indicate that there should be no more than 15% difference in performance between divisioning and final events. If an athlete exceeds their divisioning event performance by 15% in the final round of competition the following shall occur.

If the coach is of the opinion that his/her athlete has not competed at the best of their ability in the divisioning race, and may be in danger of violating the MPR, they have the option to submit a faster time for their athlete so that they can be placed in a division which reflects their ability.

If an athlete falls or is disqualified in their divisioning event the coach has the following options:

*NOTE: The following events are eligible to be rerun:

If an athlete falls or is disqualified in the second divisioning race, they will have the following two options:

Implementation of the MAXIMUM PERFORMANCE rule cannot be protested.

For sports like Cross Country Skiing, where environmental changes can impact the performance of the athlete, the following procedures should be implemented:

Prior to the start of each cross country divisioning event, a forerunner would ski the track to determine a baseline time for the course. The same forerunner would ski the track again prior to the final race in each event to establish if the track conditions favour a faster time. This will establish if a percentage change is required to be made to the maximum performance rule. Coaches will be informed if a percentage change is to be made.