Each year, Special Olympics Canada recognizes its incredible athletes, coaches and volunteers from across the country who exemplify the spirit and essence of the movement at our National Awards Night.

Tune in to the TSN Facebook page at 7pm on November 1st to meet our athletes, coaches, team of the year and more!

Presented annually to two of Canada’s most outstanding athletes. 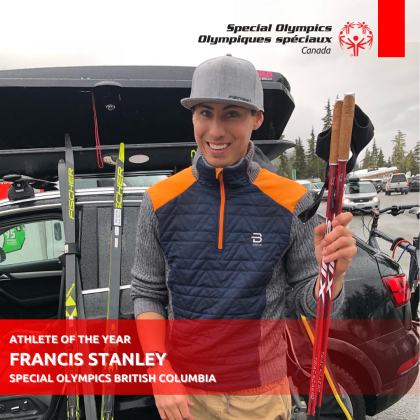 Francis’s athletic accomplishments include winning gold medals in Cross Country Skiing at both the national and world level, and he was most recently named to Special Olympics Team Canada 2022. One thing Francis’s coaches, friends and family will tell you is that Francis never stops thinking about skiing and Special Olympics. His expression of sheer joy for his sport Is infectious. He has amazing focus and determination to continuously challenge himself to get faster and reach new personal bests. His pride for being a Special Olympics athlete is clear to everyone he meets – it’s one of the first things he will tell you about himself. He is passionate about spreading awareness for the organization and sharing the achievements of his fellow athletes.

Congratulations to Special Olympics Athlete of the Year, Francis Stanley! 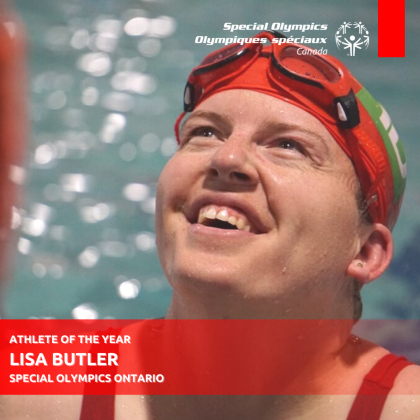 Throughout the years, Lisa has represented her province of Ontario at many Special Olympics Canada Games and was most recently named to Special Olympics Team Canada 2022. Despite her rigourous virtual training with the National Team Program, Lisa was always eager to add more to her training schedule. When her local Special Olympics swim team held a weekly fitness and creativity challenge, Lisa never missed recording a workout or art project – for 50 consecutive weeks.  Whether she’s on the court, in the pool or on the track, she’s known to always demonstrate incredible sportsmanship.  You will often see Lisa pass the ball to a teammate who might not get as many chances to shoot a basket – and she always makes a conscious effort to thank her Coaches and officials for everything they do.

Congratulations to Special Olympics Athlete of the Year, Lisa Butler!

Presented annually to two of Canada's most outstanding coaches. 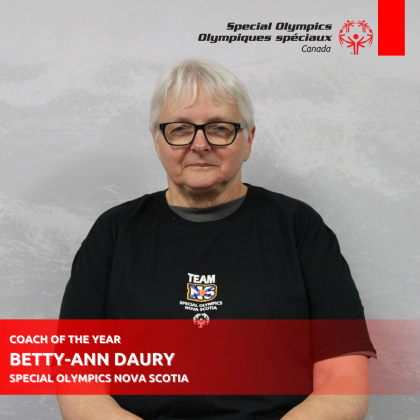 Meet Betty-Ann Daury, one of Special Olympics Canada’s Coaches of the Year.

Aside from coaching her athletes, Betty-Ann holds a number of other volunteer roles – from sitting on the Special Olympics Nova Scotia Board and the Provincial Leadership Council to mentoring athlete leadership and helping to develop new coaching education courses in her sport of snowshoe.

This past year, Betty-Ann was one of the training coaches for the Special Olympics Team Canada Training Squad 2022. She and her two snowshoers would meet 3-5 times a week, using the beaches of Nova Scotia as an alternative to snow. Betty-Ann is as committed a Special Olympics coach as there comes.

Congratulations on being named Coach of the Year, Betty-Ann! 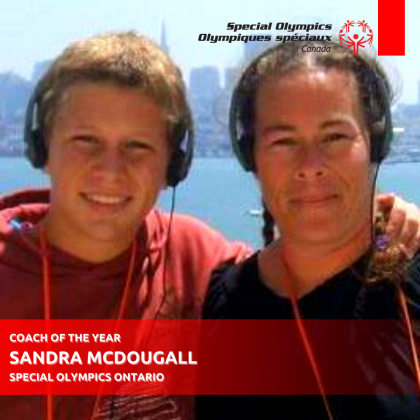 Meet Sandra McDougall, one of Special Olympics Canada’s Coaches of the Year.

Sandra has been involved with Special Olympics for the past 12 years and currently coaches basketball, floor hockey and soccer. She is also an active member of the Special Olympics Thunder Bay Community Council, where she assists in organizing regional Games. She has initiated new programs like the Unified floor hockey and basketball tournaments at Fort William First Nations Arena and Special Olympics Nights at Lakehead University varsity basketball games. These new community relationships have brought many new valuable volunteers and sport opportunities to the organization.

Though her teams were on pause through the pandemic, Sandra, along with her son Braylen and daughter Tyler, responded by creating virtual and in-person training sessions for all Special Olympics athletes in their region. As soon as a safe return to play was possible, Sandra opened her programs back up with athletes at full capacity – eager to get back.

Congratulations Coach of the year, Sandra! 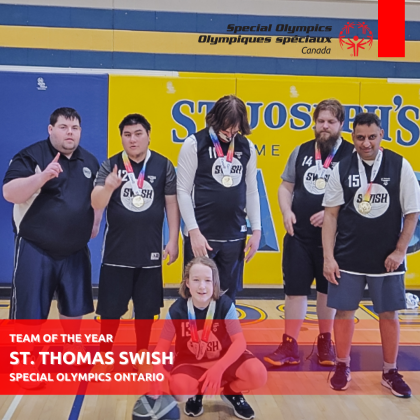 The St. Thomas Swish basketball team was formed in 2015 and went a perfect 7 wins 0 losses that first season. Even more impressive is that all these years later, the small but mighty team of 9 athletes and 2 coaches have only ever gotten a positive review wherever they go, whoever they play. The Swish team takes representing their town very seriously, and are known for their sportsmanship and respect on and off the court – they have even played games where other coaches have complimented them for their team spirit.

The Swish team is always looking for ways to help out in their community. Every year they play the local police and fire services. In the summers, they hold open games in the park and invite people to join, helping to break down stigmas against individuals with intellectual disabilities. It’s always a great turn out and a lot of fun for all involved.

Rising Star Coach of the Year

Presented annually to one of Canada's most outstanding coaches, who have been volunteering with the organization for five years or less. 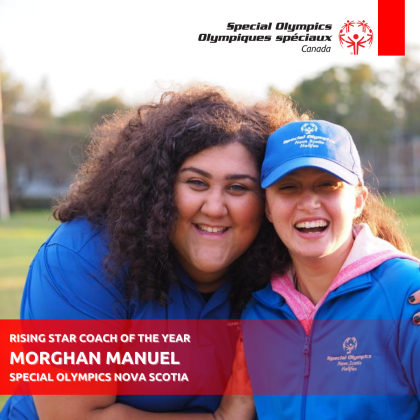 Morghan Manuel is the first-ever recipient of the Special Olympics Canada Rising Star Coach of the Year Award – a new category introduced this year. A former competitive soccer player herself, Morghan has helped coach Special Olympics Halifax Soccer for the past 3 years.

Morgan was originally introduced to Special Olympics by one of her teammates in highschool who was already volunteering. After completing her undergrad, Morghan returned to Nova Scotia for her Masters Degree in speech-language pathology at Dalhousie University, and started her coaching journey with Special Olympics at the same time.

Her fellow coaches say that Morghan has a natural ability to connect and relate with her athletes, and has been instrumental in building comprehension of team dynamics and communication skills. The team and each member of it is stronger because of her patience and positive, motivating nature.

Congratulations to our first-ever Rising Star Coach of the Year Winner, Morgan Manuel! We can’t wait to see what comes next in your Special Olympics coaching career. 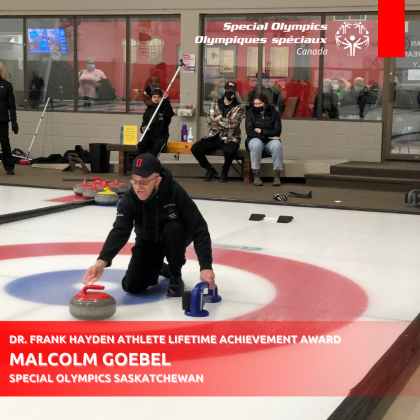 The Award honours Canada’s Dr. Frank Hayden and his lifetime of achievements and contributions for an organization he has loved his entire life. His research and idea of sport empowering those with an intellectual disability led to the founding of Special Olympics more than 50 years ago. This award goes to a Special Olympics athlete who has exemplified the spirit, philosophy and goals of the movement over the course of their career.

Malcolm has been a dedicated Special Olympics athlete for the past 39 years. He participates year-round in a variety of sports including Basketball, Bocce, Bowling, Curling, Floor Hockey, Softball, Speed Skating & Athletics.

While he has competed and medaled at many Special Olympics Canada Games, what sets him apart is his spirit at each practice. As an individual, he cheerfully puts his best effort forward as a coachable athlete, wanting to perform at his highest level. As a team player, he is first to lend a hand, pass the ball or share words of encouragement – always putting his team first. He helps to make new athletes feel welcome and included. He always shows up with a smile and gives 100% effort.

Please join us in congratulating Malcolm Goebel as our 2022 winner of the Dr. Frank Hayden Athlete Lifetime Achievement Award. 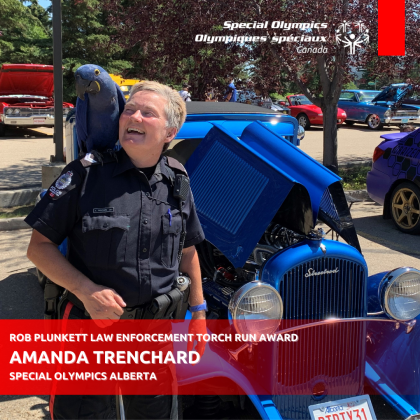 Between each Torch Run, Amanda continues to train with her athletes, running local marathons and half marathons together. Amanda has also spearheaded many fundraising initiatives, including establishing Heroes Running For Heroes and being a part of the small group of people that brought the Polar Plunge to Alberta, one of the largest fundraisers province wide that has now expanded into 5 different cities.

She’s driven by one thing – her dedication to the athletes and the goal of inclusion for all. 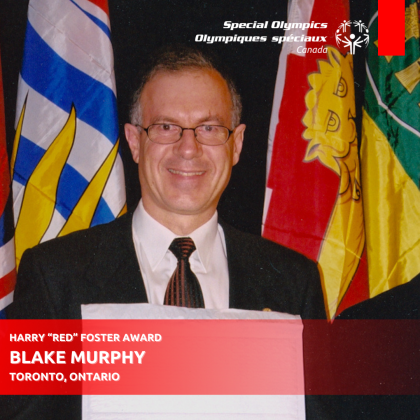 Blake Murphy has been involved with Special Olympics for over 40 years.

He became an integral part of the creation and financial administration of the Special Olympics Canada Foundation at its 1997 inception. He then served as the Director and was instrumental in assisting with scripting the by-laws and articles of its incorporation. Since then, he has remained the Foundation’s treasurer for the past 25 years.

This Award honours the late Harry “Red” Foster for his contributions to the Special Olympics movement, which holds extra meaning for Blake – his Godson. Ever since he first became involved with Special Olympics, Blake has been motivated by a strong sense of commitment to his Godfather’s legacy.

In addition to his roles with Special Olympics, Blake is also Treasurer of the Harry “Red” Foster Foundation, which since 2012 has donated nearly $2 million to support Special Olympics in Canada.

While committed to honouring the movement’s history, Blake always has his eyes set on the future. Over the past year and half, he has been a dedicated member of the advisory committee for the creation and implementation of a National Planned Giving Program for Special Olympics Canada, its Foundation and Provincial/Territorial Chapters. 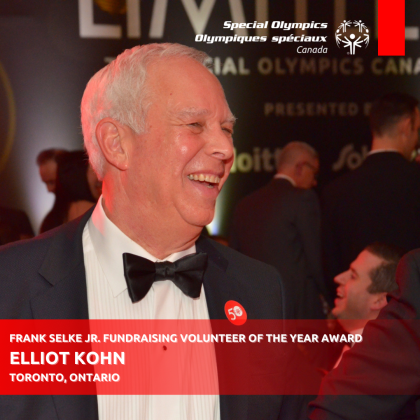 Elliot Kohn has been a proud champion of Special Olympics in Canada since 1999, when his company, Kubik, became a National Partner. Every year, Kubik provides invaluable in-kind support for competition and Games, as well as fundraising events and national awareness campaigns - no request for support is ever denied, and Elliot often goes above and beyond.

Elliot also serves as the Co-Chair of LIMITLESS: The Special Olympics Gala, SOC's signature fundraising event. As a volunteer, leader and sponsor over the past eight years, he has played a critical role in the success and growth of this vital event. Under his leadership, the Gala continues to surpass its ambitious annual fundraising goals - even throughout the two years of the pandemic, when Special Olympics Canada had to shift to an appeal and a virtual event.

Elliot believes deeply in the Special Olympics mission to enrich the lives of individuals with an intellectual disability through sport.  An avid sportsman and fan himself, he understands the transformative power of sport. He is a strong proponent of inclusion and empowering all to achieve their full potential.  Like Frank Selke, he is adept at forging and nurturing personal relationships and seizes opportunities to educate others about Special Olympics, its importance and impact, and secure their support of the movement.

Named after the late Jim Thompson, former TSN President and Special Olympics champion, this annual award is given to an operational volunteer who has made a significant contribution to the Special Olympics movement locally, provincially, and/or nationally, and has best exemplified the spirit, philosophy and goals of Special Olympics Canada. 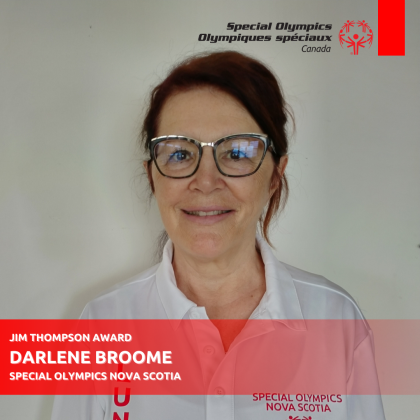 Darlene Broome first became involved with the Special Olympics 17 years ago when her son Matthew joined as a track athlete. Since then, she has gone on to impact almost every operational aspect of Special Olympics within her community of Lunenburg-Queens Nova Scotia.

For the past 5 years Darlene has held the position of Regional Coordinator while also coaching Bocce and Curling. She’s led her athletes to multiple Provincial and National Games. Her peers describe her as having all the necessary qualities to be a star volunteer – kind, empathetic, thoughtful, incredibly hard working, a support to all those around her and 100% committed to helping Special Olympics thrive.