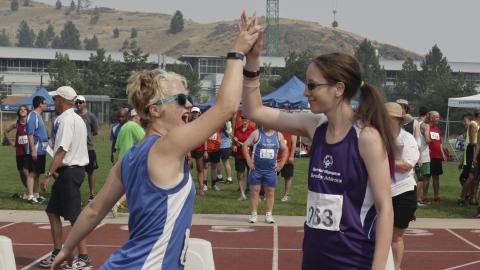 From July 21 to 24, 2016, Special Olympics BC athletes from around the province competed in the Abbotsford 2016 BC Summer Games in athletics and swimming.

The BC Summer Games provides a competitive multi-sport environment that supports the development of athletes, coaches, and officials as they move on to higher levels of competition.

SOBC athletes have been showcasing their skills in the generic BC Games for 12 years, competing in Special Olympics divisions. Prior to 2014, SOBC athletes at BC Games competed in athletics and swimming. Their expansion into BC Winter Games began in 2014 with basketball and continued in 2016 with the addition of figure skating.

“The BC Games are always an exciting opportunity for athletes and coaches to compete and learn. Our athletes get a lot out of competing and being part of the BC Games environment, and they put on a great demonstration of their skills as they participate alongside the mainstream athletes,” says Shawn Fevens, SOBC Manager, Sport.

Full Special Olympics results are below.

Full event results from Swim BC