More than 100 leaders from across the province came together for a weekend of inspiring speakers and networking opportunities at the 2018 Special Olympics BC Leadership Summit in Richmond. Held on October 27 and 28, the event also provided an opportunity to celebrate the 50th anniversary of the Special Olympics movement and recognize the outstanding work of a number of individuals and organizations.

The summit brought together a knowledgeable, enthusiastic group that included SOBC athletes, members of the Board of Directors, staff, and volunteers representing 46 Locals. For many attendees, the event provided an opportunity to learn from expert speakers and each other, and bring new tools and ideas back to their communities or Regions. Topics included branding, the Cultural Inclusion Project, finance, fundraising, health issues related to people with intellectual disabilities, the Performance Program, sport development, and youth programs.

SOBC – Burns Lake Local Coordinator Gloria Brown said she learned a lot from presenters and other volunteers at the summit.

“It was fantastic, inspiring – loved it!” she said.

Brown says one of her takeaways from the event is how competition plays an important role in helping athletes develop their skills and experience the joy of sport. Coming out of the summit, one of her goals was to provide athletes with more opportunities to compete, and her Local has already acted on this by scheduling a snowshoeing competition in January.

“If anyone ever gets offered a chance to go to the summit they should definitely take it,” she says. “Because it’s an amazing event and it inspires you!”

Special Olympics Canada Board of Directors Chair Mark Tewksbury and SOBC – Langley athlete Matthew Williams kicked off the summit with inspiring speeches that set the tone for the weekend.

A gold-medal-winning Olympic swimmer, Tewksbury talked about what he has learned through his involvement in sport, including the importance of inclusion, diversity, and working together as a team. Tewksbury says Special Olympics has a lot to teach other sport organizations, and whenever he gets a chance to see Special Olympics athletes compete, he is always impressed by their dedication and sportsmanship.

“It’s that spirit of ‘We cheer for sure for the brave individual that puts it out there and come first, and we often cheer even louder for the athlete that finishes up the pack, because we all appreciate that determination and that joy of effort.’”

Tewksbury thanked the summit’s attendees for all they do to support Special Olympics, and reminded them that they play a critical role in helping SOBC athletes reach their goals.

“You guys are that team behind the team, and I just want to say what an honour it is on this particular day during our 50th anniversary to share that with you.”

Williams spoke from an athlete’s perspective, talking about the challenges he has faced and how Special Olympics has helped him thrive. When Williams was growing up he loved playing sports, but as he got older he had trouble keeping up and fitting in with his teammates. Eventually he made the very tough decision of quitting organized sports. Then, Williams got involved with Special Olympics, and it changed his life forever.

“It was the first time that I accepted who I was, and I was proud of having a disability, and I wasn’t ashamed for people to know who I was. And that really meant a lot for me, and I really still remember that moment and how valuable it was.” 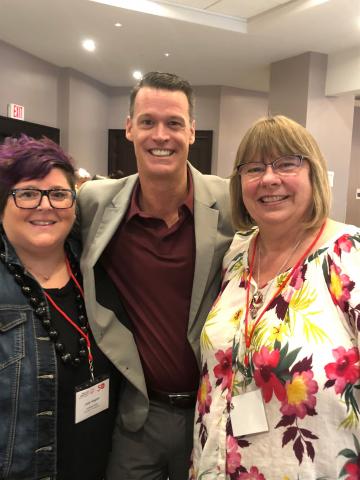 SOBC – Campbell River Volunteer Coordinator Jody Higgins said she found the speeches very inspiring, and a highlight of the summit for her was seeing how much mutual respect there was between Tewksbury, Williams, and the other Special Olympics athletes in attendance.

“That gave me super warm fuzzies,” she said.

Higgins said one of her big takeaways from the summit was the importance of having contingency plans for volunteer recruitment, and making sure knowledge is passed down from experienced volunteers to new recruits.

Read more about the 2018 SOBC Hall of Fame inductees

Pagliaro said she learned a lot from the presentations, and she appreciated how the summit included information on the history of Special Olympics. She said the event reminded her that she is part of a bigger community and that volunteers play a critical role in the success of SOBC.

“I went away with a feeling of knowing that I am part of something worldwide, special, and big – and what I do makes a difference!” 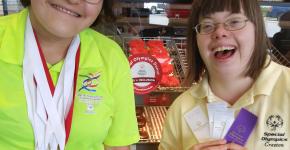