The LETR International Conference is being held in Aurora Colorado in September 2019 and our program will be sending delegates to this event.

We have many inquiries into why and how certain volunteers are selected to attend International Conference.  Below is an explanation of the process, the successfully applicants and why they were chosen.  We are hoping this will help our volunteers understand what is required to be a successful applicant for future conferences.

The process for delegate selection was developed to be open, fair and transparent.

Each applicant completed the “Application Questionnaire” where they provided information on their 2018 LETR activities in response to specific questions.

An evaluation team consisting of three Alberta LETR volunteers was put together. The criteria for these three members was that they were not on either the LETR Operations Committee or the Executive Committee, have attended an International Conference in the past, and had not applied for the 2019 Conference.

A scoring matrix was developed to score the information each delegate applicant provided in their questionnaire. Each application was anonymized so the evaluator would not be aware of the applicant’s name.

In addition to each score, the evaluator provides brief comments to support the score given.  For example, if the applicant was given a “0,” a comment could be: “The applicant has not provided any information that meets the criteria in this question.”  Or conversely if the applicant was given the maximum score the comment might be: “The candidate has volunteered XXXX of hours, has raised $XXXX, or has organized XXXX number of events over the course of the year.”

Ten (10) delegate spots were to be filled using the following categories:

Categories A and B are very specific to their criteria. The figures provided by the applicant were validated by the Torch Run Manager.

Category “C” is a broad ranging. A volunteer event organizer, or participant in multiple fundraising events in 2018. We were looking to recognize volunteers who have stepped up to organize an event or events, or who have volunteered on a regular basis throughout the year.

Category “D” is meant for LETR volunteers who generally have been active for two (2) years or less and show potential for future involvement. Special consideration was given to increasing LETR participation in certain agencies.

Category “E” speaks for itself.   “Demonstrated Significant Leadership.”  This can include someone who has chaired their LETR Region Committee or Agency Committee. But it also includes those people who organize events in a manner that exhibits leadership, recruiting and mentoring new volunteers, recognizing the contributions of volunteers.  Also, volunteering or accepting positions on Committees from the Regions or the Op’s Committee.

Using the scoring matrix for each applicant, the evaluators were requested to recommend a category/categories the applicant may qualify for.

The evaluators completed a “Delegate Recommendation by Category” form. These forms were compared for determining if there was consensus on a delegate or delegates in a given category. In those instances, those persons were determined to be the delegate(s) in those categories. In the event there was not consensus, the overall scoring matrix was used.

After evaluating and scoring the applicants, the recommended list was provided to the Operations Committee for review, then to the Executive Committee for approval. The list was accepted without change.

The delegates representing Alberta LETR at the 2019 International Conference are listed as follows:

Theresa has been an LETR volunteer for 7 years. In 2018 Theresa volunteered 382 hours at various events. The primary event was the annual Harley-Davidson Raffle, where Theresa travelled the province selling tickets at trade shows. This also entailed spending over $5,000 of her own money in travel expenses. Theresa also organized the first ever “Wine for Winners” Wine Tasting and Silent Auction which was held in October 2018. In addition, Theresa volunteered for the Truck Convoy and recruited a bronze level sponsor. Theresa also volunteered at the Grande Prairie, Cops Pop and Pizza in December 2018.

Cat has been volunteering with LETR for 3 years in the South West Region. In 2018, Cat was a co-organizer of the Cops Pop and Pizza held in Lethbridge. Cat was also a co-emcee at the Alberta LETR Kick Off Conference held in November 2018. Cat provided support for the annual LETR 500 km Provincial Bike Ride and was a participant in the “Cycle for a Cause” event in Lethbridge, raising $700 with her team. In addition to being a participant, Cat helped with set up and tear down of the event. Further to the above event, Cat spent a day selling Harley Raffle tickets at the Lethbridge Home Show, assisted with setup and merchandise sales at the Medicine Hat Polar Plunge and was one of the organizers and plungers at the Lethbridge Polar Plunge, personally raising over $1000 in pledges.

Josh is a four-year LETR volunteer in the Edmonton Region where he actively participates in the Region Committee Meetings. Josh was a committee member and participant in the 1st Annual Heroes Run held in October 2018. In February 2018 he volunteered at the Province wide Mr. Lube LETR promotion, and in January 2018 he participated in the Edmonton Polar Plunge where he rallied a team of Alberta Sheriff’s to participate. He personally raised $1200 for this event. Josh is actively recruiting new volunteers for LETR, both from his prior organization, and now with the Edmonton Police Service.

Jimmy Jones has volunteered with LETR for the past six years, working out of Wetaskiwin Alberta. He is the principal organizer of the Wetaskiwin Free our Finest which has run for the past four years. Jimmy also created a new event called “Battle of the Badges”, a hockey game between Law Enforcement and Fire. Over $14,700 was raised in this first-time event.  Jimmy is a strong supporter of Special Olympics representing LETR and the RCMP at various local SO events.

Shawn is a new volunteer with LETR in the South West Region, having taken on a Community position with the Lethbridge Police Service. Shawn’s first involvement with LETR was at the 2018 Lethbridge Polar Plunge where he volunteered to help in the planning in the day leading up to the plunge, as well as on plunge day. Shawn is also a part of the LPS Half Marathon Organizing Committee and while this is not a LETR event, LETR is the financial benefactor receiving over $35,000. Shawn has been actively recruiting LETR volunteers within LPS and is working to increase the level of communication of LETR activities within the LPS.

Michael is a Sergeant with the Edmonton Police Service and currently the President of the Edmonton Police Association. He is also the Vice-President of the Alberta Federation of Police Associations and a Director with the Canadian Police Association. Michael has been actively working with the AB LETR Manager to increase awareness of LETR throughout Alberta policing agencies, and to increase corporate sponsorship throughout the province. Michael’s first LETR event was the 2018 Edmonton Polar Plunge where he raised funds (approx. $2000) and participated as a plunger. He is very active on social media and consistently promotes LETR fundraising activities.

Matt has volunteered with LETR in the South West Region for six years. In 2018, he was the co-lead for the Lethbridge LETR Gala as well as the Provincial 500 km Bike Ride. Matt also helped coordinated Harley Raffle tickets sales at the Lethbridge Home show and was a participant and member of the planning committee for the Lethbridge Polar Plunge. Matt is a member of the South West Region Committee and represents the committee at Special Olympics Meetings keeping them up to date of the Regions’ events and fundraising activities. Matt has also taken on the task of being the Social Media point person for his Region.

Mat has volunteered with LETR in the South West Region for fourteen-years. He is currently the Region Chairperson and sits on the Lethbridge Special Olympics Board. Mat is the principle lead on the Lethbridge Polar Plunge which raised over $35,000 in 2018. He also volunteered at the Medicine Hat Polar Plunge assisting with setup and tear down. Mat helped organize the Harley Raffle booth at the Lethbridge Home Show working two full days at the booth and coordinating the volunteers for the show. Mat was a participant in the Lethbridge Cycle for a Cause and in addition to raising funds assisted with event day set up and tear down. Mat was the co-lead for the 2018 Provincial 500 km Bike ride where he also participated as a rider. He personally raised over $1700 with the event raising over $35,000. Mat also organized the Lethbridge Cops Pop and Pizza event held in December 2018. Over $4500 was raised. In addition, Mat was a committee member for the Lethbridge LETR Gala held in October 2018 working on all facets of the event. Lastly, Mat presented a session at the Alberta LETR Kick Off Conference and served as the Co-Emcee for the Awards and Recognition Banquet.

Update from Law Enforcement Torch Run for Special Olympics Alberta
04/02/2020 - Through all this uncertainty, we are absolutely certain of one thing: how grateful we are for the support and partnership of outstanding...
View More 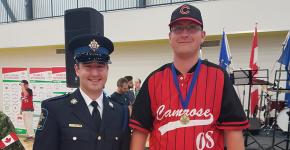 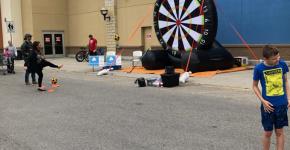 2019 Free our Finest - Airdrie
From August 9 to 11 officers hit the rooftop of Walmart for Free Our Finest in Airdrie. The event raised over $5900 this year in support of Special...
View More

2019 Free our Finest - Olds
On June 22, officers hit the rooftop of Walmart for Free Our Finest in Olds. The event raised over $1800 this year in support of Special Olympics...
View More